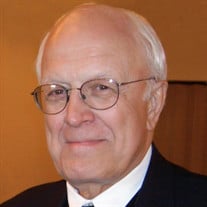 A. Creig MacArthur, age 82, of Provo, Utah passed away peacefully Tuesday, May 25, 2021 surrounded by family. Creig was born the eldest child to Arthur Edgar MacArthur and Estella Fay Sumner MacArthur in Provo, Utah on July 27, 1938. He was later joined by four siblings — one of whom died at birth. He grew up in Provo and Orem and worked from a young age on fruit farms in Utah Valley with the events of World War II as a backdrop. In school, Creig excelled in science and math, developed a fondness for jazz while playing in the school band, and found a mentor in his music teacher, Wes Barry. He was the drum major at Lincoln High School in Orem where he played clarinet and saxophone. He loved sports throughout his youth and played basketball, football, and played first base on the high school baseball team. Shortly after graduation, he joined the Air National Guard as a member of the 151st medical evacuation group based in Salt Lake City, Utah. To earn money for college, Creig worked on road construction crews near Jackson Hole, Flaming Gorge, and Leeds, Utah. It was during this time he cemented his professional goals. When a close friend was fatally injured, he ran to his side and did all that he knew how to make him comfortable and help him. Creig resolved then and there to become a physician. He served a mission for The Church of Jesus Christ of Latter-day Saints in Paris, France from 1958 – 1961, where he gained a lifelong love for France and an enduring testimony of the Gospel. While attending Brigham Young University, Creig met and married Suzanne Holfert in the Salt Lake Temple in 1963. Together they had six boys. After graduating from BYU, he attended medical school at George Washington University in Washington, D.C. where he learned the importance of education and the value of the knowledge that comes with it. After an internship in El Paso, Texas, where he was a Captain in the Army, his family moved to Soledad, California for a brief internship, and then on to Rochester, Minnesota where he specialized in Orthopedics and Sports Medicine at the Mayo Clinic, serving his final year as the Chief Resident. Upon the completion of his Orthopedics residency the family moved to Provo, Utah to join a practice with Dr’s. Nephi Kezarian (who had treated him as a high school football player), Eugene Chapman, and Lyle Jacobs. Creig looked forward to the opportunity of bringing his world-class medical training back to his hometown to serve the community which had been so good to him. He loved his patients and worked all his life to advance the medical expertise at the Utah Valley Regional Medical Center and to provide medical care in rural clinics in Delta, Richfield, Duchesne and Gunnison Shortly before his retirement, he was asked to participate in a humanitarian effort in response to the Haitian earthquake which had devastated the island in January of 2010. Calling on his French language skills, military background, and decades of medical training he spent endless hours each day treating and operating on victims of the earthquake to alleviate their suffering. While in Provo, Creig and Suzanne wanted a daughter and were blessed to have Cindy join the family in her teenage years, followed by the adoption of Meiganne, born in 1981. Creig and Suzanne later divorced, and during this difficult time he was surrounded and supported by his loving siblings, dear friends (Brent Chandler, Howard Francis, Jim Kelson, and Chad Moon) and his many co-workers. He always made himself available to his children and regularly took calls from them while in the operating room. After four years as a single parent, he met and fell in love with Lisa Kaye Luke and her four children while working at the BYU Health Clinic. They were sealed for eternity in the Provo Utah Temple on January 25, 1992, and have honored the covenants they made to each other every day since. Through Lisa’s love and kindness Creig’s health and confidence were restored and together they worked to stitch together what had become a very large and loving family. Creig loved hunting, fishing, boating at Lake Powell and the friends and family he was able to share these experiences with. As a child he had dreamed of hunting big game in Africa and was able to fulfill this dream with his very close friends. The annual Christmas parties, General Priesthood Meetings, 4th of July parades and fireworks were favorite traditions of the family. Most of all, he loved his children, grandchildren, and great grandchildren. Creig is survived by his wife Lisa, sibling Trevan (Sondra), and his children Cindy (Phil) Ballif, Alan (Christina), Andrew, Bruce (Becky), Barry (Donnalynn), Clay (Krista), Cameron (Cassidy), Brent (Megan) Castagnetto, Bryce (Lori) Castagnetto, Angelina (Lane) Seegmiller, Emilia (Jake) Chrisman, and all his grand and great grandchildren. He was preceded in death by his siblings, Sumner, Cheril, Steven, and daughter Meiganne. His love, wisdom, and unique ability to accurately assess and then correct many times daunting challenges will be missed, but many bodies and relationships endure and thrive today because of him. He loves others dearly, as they do him. Funeral services will be held at 11:00 a.m., Wednesday, June 2, 2021 at the Grandview 21st Ward Chapel, 1600 North 1880 West, Provo, Utah. Friends may call at the Berg Mortuary of Provo, 185 East Center Street, Tuesday, June 1 from 6-8:00 p.m. and at the church Wednesday from 9:30- 10:45 a.m. prior to services. Interment, Provo City Cemetery. Condolences may be expressed at www.bergmortuary.com. Grandview 21st Ward is inviting you to a scheduled Zoom meeting. Topic: Creig Macarthur Funeral Time: Jun 2, 2021 11:00 AM Mountain Time (US and Canada) Join Zoom Meeting https://zoom.us/j/96151623477?pwd=blJDaGU5OERJMkVHSzQyT2RxUEYvUT09 Meeting ID: 961 5162 3477 Passcode: 217235

A. Creig MacArthur, age 82, of Provo, Utah passed away peacefully Tuesday, May 25, 2021 surrounded by family. Creig was born the eldest child to Arthur Edgar MacArthur and Estella Fay Sumner MacArthur in Provo, Utah on July 27, 1938. He was... View Obituary & Service Information

The family of Dr. A. Creig MacArthur created this Life Tributes page to make it easy to share your memories.

A. Creig MacArthur, age 82, of Provo, Utah passed away peacefully...

Send flowers to the MacArthur family.