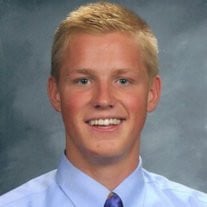 Adam Black Christiansen died September 21, 2013 in Orem, Utah of an accidental drug overdose. “We lost a hero and incredible young man, but heaven has received an outstanding warrior.” Adam was born September 29, 1993 in Cody, Wyoming to JoanE Black and Steven Aagard Christiansen. He then lived in Meeteetse & Burlington, Wyoming. From age eleven to fourteen, he lived in Colonia Juarez, Chihuahua, Mexico. While in Mexico, Adam was severely burned on forty percent of his body. As a result of the many pain medications used to manage his long recovery, an addictive course was set for the remainder of his life. Though Adam struggled mightily with addictions, his faith was only strengthened. He fasted, prayed, studied, loved and served all the more faithfully. In spite of his challenges, he accomplished and did much in his life. On his own initiative (without the help of his mother!), he achieved the rank of Eagle Scout at age thirteen. He earned his LDS Duty to God Award and was a four year seminary graduate. He had firm faith in his Lord and Savior. His testimony was most often expressed in action rather than words. Adam was an Elder in The Church of Jesus Christ of Latter-day Saints. As a friend said, “Adam never knew a stranger and always embraced everyone with love and compassion.” On every family and church Pioneer trek, Adam was there to carry anyone across the creeks and pull the handcarts. Adam loved the outdoors and went on some grand adventures. In 2012, he spent ten days hitchhiking alone in the Mexican Yucatan Peninsula in Mexico with little more than a backpack and hammock. He and his good friend Cash Richmond did a “survival” hike off the Big Horn Mountains of Wyoming, swam across the Yellowtail Reservoir and biked to Lovell. He skydived just outside Zion’s National Park and raced his brothers off the top of Angel’s Landing to the valley floor below. He biked, hiked, camped, motorcycled, four wheeled, and lived! Adam was a great athlete and musician. He had leads in several musicals, including Man of La Mancha, the Drowsy Chaperone, Thoroughly Modern Millie and The Wizard of Oz. He played drums, piano and guitar and recorded music with his brother Andrew. He participated in football, track and basketball. With his farm upbringing, he learned to work hard and understood the “law of the harvest.” Everyone he ever worked for wanted him back when he could. He loved learning new skills. He was particularly appreciative of the home building skills learned from his friend and mentor, Scott Shoopman. He continued this passion by attending Utah Valley University in the Construction Management Program, where he currently attended at the time of his death. He also attended Northwest College in Powell, Wyoming, Timpview High School in Provo, Utah and graduated from Powell High School. He loved his family and friends and often expressed it with a big hug. You knew you’d been hugged when you got an “Adam” hug. Adam lived LIFE - Love In Full Expression - to the maximum! A great void has been created in this world with his passing. We love you eternally Adam and will think of you every day of our lives. Adam is survived by his parents and siblings, Alayna, Aaron, Andrew, Abby (Colin) and Alexander, all of Provo, and by his Grandparents John and Marian Black of Crestwood, Kentucky as well as numerous Uncles, Aunts and Cousins. He was preceded in death by his paternal grandparents, Arden and Phyllis Christiansen and five cousins. A viewing will be held Thursday, September 26, 2013 from 9:30 - 10:30 AM at the Foothill Ward building at 345 East 4525 North in Provo, Utah. Funeral services will follow at 11:00 AM. A viewing will also be held Friday, September 27, 2013 from 5:00 - 7:00 PM at the LDS Church on 7th Avenue in Powell, Wyoming with visitation Saturday, September 28, 2013 at 9:00 AM and funeral services following at 10:00 AM. Interment follows in the Burlington, Wyoming cemetery.

The family of Adam Black Christiansen created this Life Tributes page to make it easy to share your memories.

Send flowers to the Christiansen family.