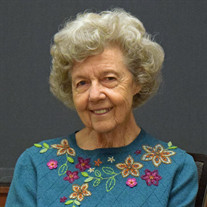 Our precious Mother, Grandmother (Grammy), Great-Grandmother and Great-Great-Grandmother passed away on Thursday, December 12, 2019 in Spanish Fork, Utah. She was born on May 25, 1927 to Scott and Gladys Thompson in Provo, Utah. She was raised in Provo until her junior year in high school when the family moved to Orem, where her Father began his position as the first Fire Chief of Orem City. Her Mother worked at Utah Valley Hospital for many years. Over the years she worked at Salmon Pharmacy, Rodeway Inn and retired from Peterson Oil. She had fond memories of her employers and co-workers; some of whom became her lifelong friends. She married Thomas Ivan O’Neill in February of 1946 in Fillmore, Utah. They were later divorced. Shirl loved to bake and always shared her delights; whether it was taking goodies to her son and grandson at Flowserve or her daughter at Utah Valley Hospital. Many more family, friends and neighbors enjoyed her baking. She is survived by two daughters, Kathleen (Zene) Weimer and Peggy (Ted) Lockhart; her grandchildren, who were the apple of her eye: Mathew (Catorina) Weimer, Ryan (Darcy) Weimer, Aaron (Stacy) Weimer, Jesse (Callie) Wright, Stephen (Cresha) Wright, Donavon (Spring) Wright, Mandie (Jon) Burton, Patrick (Stephanie) O’Neill, Sean (Emily) O’Neill, Colin O’Neill; nineteen great-grandchildren and one great-great-grandchild; daughter-in-law, Sheila O’Neill and numerous nephews and nieces. Much love goes out to her niece, Marilyn Hayes, who helped take care of her and to her nephew, Rick Pawlowski, who was always willing to come and help whenever we called. Shirl was preceded in death by her parents, son Kelly O’Neill, one brother and five sisters. The family would like to express appreciation to the kind and wonderful staff at Legacy House in Spanish Fork and Courtyard at Jamestown, as well as great appreciation to, Dr. Noonan, and her assistant, Racquel. We couldn’t have asked for a better physician and nurse to care for our Mother. Funeral services will be held at 11:00 a.m., Saturday, December 21, 2019 at the Berg Drawing Room Chapel, 185 East Center Street, Provo, Utah. Friends may visit with the family from 10-10:45 a.m. prior to services. Interment will be in Eastlawn Memorial Hills. Condolences may be expressed and memories shared at www.bergmortuary.com.

The family of Afton Shirlene Thompson O'Neill created this Life Tributes page to make it easy to share your memories.

Send flowers to the O'Neill family.