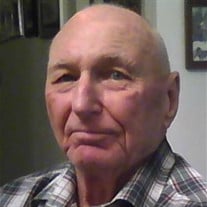 Alan Carling, “The most kind, wonderful and caring man I have ever known,” died at home in the arms of his beloved wife, Christine Carling, on the evening of August 10, 2014. He was surrounded bedside by loving family members and was visited by friends and neighbors before he peacefully left his mortal body. Alan was born on June 21st in the year 1930. He was 84 years old. His eyes were piercing glacial blue yet his heart was anything but cold; rather warm and inviting like the home he and the love of his life Christine built. His smile was always genuine and telling. His hands were labored from a life of hard work and his body was strong like his work ethic. He served proudly in the Navy as a young man and thereafter worked as a welder for Mountain States Steel. Alan’s disposition was careful as he kept over many Latter-day Saint church houses cleaning and preparing them for spiritual services. Alan believed in his faith and kept his callings. Although Alan grew up in Utah Valley he also lived in San Diego and Lompoc, California as well as Shelton, Washington for a time. He lived the majority of his life in American Fork, Utah where he enjoyed time living close to relatives, friends and neighbors. Alan, Grandpa–thank you for your kindness and for your loving and caring heart. Our most incredible mother, grandmother and great-grandmother, Christine Carling, who graciously provided Alan intimate loving care which extended the good years of his life survives him along with her large family who also greatly loves and cherishes him. Alan is also survived by his immediate daughters, Connie, Jean, Ricky, Renae, Becky and son, Larry. Alan’s living siblings include his sisters, Janis Brown (Curtis), Marilyn Brown (Ralph) and Judith Lindstrom (David) and his brother, Ronald Carling (Joan). Alan is preceded in death by his parents, George Otis Carling and Genevieve Huish Carling. Funeral services will be held at 11:00 a.m., Thursday, August 14, 2014 at the Hillcrest 1st Ward, 949 North 540 West, American Fork, Utah. Friends may call at the church from 9:30-10:45 a.m. prior to services. Interment, Pleasant Grove City Cemetery. Condolences may be sent online at www.bergmortuary.com.

Alan Carling, &#8220;The most kind, wonderful and caring man I have ever known,&#8221; died at home in the arms of his beloved wife, Christine Carling, on the evening of August 10, 2014. He was surrounded bedside by loving family members and... View Obituary & Service Information

The family of Alan Otis Carling created this Life Tributes page to make it easy to share your memories.

Alan Carling, “The most kind, wonderful and caring man I have...

Send flowers to the Carling family.