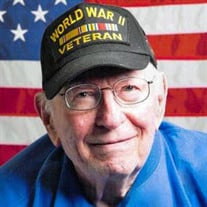 Alan Francis Sperry, age 92; beloved husband, father, grandfather, great-grandfather, and great-great-grandfather passed from this earth on Monday, May 27, 2019 in his residence from natural causes, expedited from the sorrow of missing his beloved companion, Muriel. He was preceded in death by his parents, his wife, Muriel Grace Blank Sperry, his brother, David E. Sperry (Marjorie), and his son, Mark Alan Sperry. He is survived by his children: Kristine Ford (John), Kenneth L. Sperry (Tina), Connie Travis (Doug), Bradford Carl Sperry (Melanie), and Angela Ralph; 26 grandchildren, 52 great-grandchildren, and 1 great-great-grandchild. Alan Francis Sperry was born February 10, 1927 in Pasadena, California to Leo Weight Sperry and Hazel Edwards Sperry of Salt Lake City, Utah. Due to an automobile accident near Beaver, Utah which claimed the lives of his parents, from age 3 Alan was cared for by an aunt, Edna E. Burkhardt, an uncle, Richard Oscar Burkhardt, and a grandmother, Frances Woodmansee Edwards. He was known in the 18th LDS Ward as “Franny Edwards’ Orphan Grandson”. He was educated in Salt Lake City public schools and graduated from West High School in 1945. He enlisted in the U.S. Navy as a participant in World War II and served overseas in the Navy Supply Depot: Subic Bay, Luzon, and Philippine Islands. He was awarded three medals and was honorably discharged at Shoemaker, California. Alan was involved with the Veterans Affairs and American Legion for a period of 30 years as a commander of the American Legion. President George Albert Smith called him on a three-year mission to Eastern Europe to the Czechoslovakia, Prague Mission. He was expelled in 1949 by the Stalinist Communist Regime and deported to England, where he served for 6 months until steamship bookings could be arranged for his return to the States. His mission was a highlight in his life. He loved the Czech people and the quaint, simple beauty of the country. He prayed for them daily for the rest of his life. Alan returned to Utah, entered the BYU, and began his family with Muriel Grace Blank of Rock Springs, Wyoming. They produced 6 children, two while attending college. He graduated in 1961 with a degree in Russian. He worked as an engineer for Hercules, Inc., building the Minuteman and Polaris missiles. In 1968, he was hired by Fairchild Semiconductor as the Quality Control Manager for Micro Logics Assembly at Shiprock, New Mexico. Some of their products were contracted by Hewlett Packard Co. to be used on the Apollo moon shot program. Due to their exceptional high quality and reliability, the plant employed over 1300 Native American workers (i.e. Navajo, Zuni, Hopi), whose eyesight and special relationship aptitude was exceptional and produced superior quality. His compatibility towards and love for the Native American people led him into a mid-life change in direction. In 1971, the LDS Church was embarking on a massive program for Native Americans to obtain a complete education. It was in two parts: a “home placement” program where students were sent off reservations to participating families and educated in local public school systems with the students of the participating family. The second part was “Indian Seminary”. In this program, educators were hired to teach students remaining on the reservation. Alan was contacted about joining this part 2 portion and accepted a position with headquarters in Chinle, Arizona. It was here that the Lamanite (Native American) portion of his family originated. One of his daughters, Connie, married an educated Navajo and bore 4 children by him. These 4 grandchildren excelled in every possible way. Alan spent the next 25 years coordinating LDS Indian seminaries in Arizona and New Mexico, and later in North and South Dakota, Northern Minnesota, and parts of Iowa and Nebraska. He finished up his teaching career at Dan Peterson Seminary of American Fork, where his exceptional talents were put to good use with the disadvantaged youth of the Alpine School District. He loved these folks too and sent a tape of a session to The Church Education Committee. He then retired and settled in Provo, Utah, then moved to an assisted living facility at Legacy House of Spanish Fork. Our family wants to thank the wonderful caregivers at Legacy House for their tender loving care of our father; and to Stacey and Chris of Alpha Omega Hospice. Funeral services will be held at 11:00 a.m., Saturday, June 1, 2019 at the Berg Drawing Room Chapel, 185 East Center Street, Provo, Utah. A viewing will be held from 9:30-10:50 a.m. prior to services. Interment with military honors, Salt Lake City Cemetery. Condolences may be expressed at www.bergmortuary.com.

Alan Francis Sperry, age 92; beloved husband, father, grandfather, great-grandfather, and great-great-grandfather passed from this earth on Monday, May 27, 2019 in his residence from natural causes, expedited from the sorrow of missing his beloved... View Obituary & Service Information

The family of Alan Francis Sperry created this Life Tributes page to make it easy to share your memories.

Send flowers to the Sperry family.