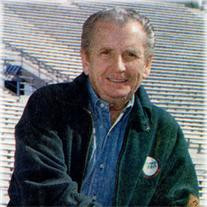 Pete Witbeck, beloved husband and father passed away Wednesday, May 5, 2010 in Provo, Utah. Pete was born, February 26, 1929 in Raymond, Alberta, Canada, a son of Hampton Witback and Angelina (Dot) O’Brien Witbeck. Pete married Kathleen Pickering on September 3, 1966. At 18, Pete journeyed to BYU on a track scholarship as a long distance runner. Pete earned his bachelor and master’s degrees before joining BYU’s staff. He became the freshman basketball coach in 1957 and came away with a 62-9 record in six seasons and went undefeated in the 1963-64 season. BYU Head Basketball Coach Stan Watts made Pete his head assistant in 1962. Four years later, the Cougars won the NIT National Basketball Championship. Pete and Stan moved to athletic administration together in 1972. His athleticism also garnered 12 consecutive BYU intramural racquetball titles as well as co-authoring a national racquetball textbook. Pete was known as one of the NCAA’s best compliance officers in college sports to get answers and interpretations to NCAA guidelines. Pete was the Senior Associate Athletic Director when he retired from BYU in 2001. He has been the right hand man for five athletic directors. He retired with 48 years of service to Brigham Young University. Pete had many interests including jogging, gardening, and spending time with his family. Pete continued his love of running throughout his life, averaging six miles most days. Pete was a wonderful husband, father, and a truly loyal friend. He was a master storyteller, reciting many entertaining stories of his experiences and travels. He had a delightful sense of humor and loved to hear and tell a joke. Pete was known for his integrity, honesty, exactness and loyalty. He was a wonderful example to his family and grandchildren. You could always count on Pete! Pete is survived by his wife, Kathy, of Provo; son, Von (Kerrie) Witbeck; daughter, Anne (Brandon) Jackson, both of Las Vegas, Nevada and daughter, Jill Young of Herriman, Utah; daughter, Tori Mobley, of Houston, TX. He is also survived by 11 grandchildren and a brother, Tom Witbeck, of Raymond, Alberta, Canada. Pete was preceded in death by his parents and sister, Nadine Price. He is loved and will be missed greatly. Funeral services will be held at 11:00 a.m., Friday, May 14, 2010 at the Edgemont 7th Ward Chapel, 555 East 3230 North, Provo. Friends may call at the Berg Mortuary of Provo, 185 East Center Street, Thursday evening from 6 until 8 and Friday at the church from 9:30-10:45 a.m. prior to services. Interment, Eastlawn Memorial Hills, Provo. Condolences may be emailed to [email protected]

The family of Alan Witbeck created this Life Tributes page to make it easy to share your memories.

Send flowers to the Witbeck family.