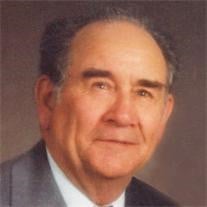 Albert (Bert) William Garrett, age 94, passed away at his home in Provo, Utah on February 20, 2012. Bert was born June 18, 1917 at the family home in Logan, Utah to William and Harriet Cooper Garrett. During his teenage years, he worked on ranches and farms in Utah and Idaho. He graduated from Logan High School and L.D.S. Seminary in 1936. After graduating from high school he signed up for the CCC Camps (Civilian Conservation Corps) in 1936. Later he moved to Orem, Utah to work on family farms where he met his future wife, Nathella Ivie. Bert was hired by Duwane Ivie to work as a Section Maintenance Laborer for the Union Pacific Railroad Company in November 4, 1937. Bert was five months shy of 40 years working for the railroad; retiring in June 1977. He was a charter member of the Union Pacific Railroad Employees Credit Union, holding positions from Secretary to President. He also belonged to the Union Pacific Old Timers Club and was a member of Good Sams Club. Bert and Nathella Ivie were married in Provo, Utah on April 27, 1938 where they settled to live, work and raise a family of two daughters and one son. Their marriage was solemnized in the Salt Lake Temple on March 27, 1958. Bert was a fix-it man around the house and built sheds, a garage out of wood and cinder block and a small teardrop camper. He loved music and loved to whistle while he worked. He loved the outdoors. Some of his favorite past times included hunting and fishing. He loved taking his wife and family on trips to Bryce, Zion's, Yellowstone and Glacier National Parks, as well as camping out, picnics up the Provo canyons and on scouting trips for good places to hunt in deer seasons. Bert had a unique personality with a great sense of humor. He cherished his friends and centered his whole life around family. Bert is preceded in death by his parents, two brothers: Lorenzo T. Garrett and Norman Garrett; one grandson, Brian P. Murray; twin great-granddaughters: Florenia and Cynthia Murray; grandson-in-law, Richard D. Franklin; his wife, Nathella Ivie Garrett; and his son, Lawrence William Garrett. Bert is survived by his two daughters: Beverly (Cecil) Jones of Mesa, Arizona, and Ileen G. Murray of St. George, Utah; daughter-in-law, Lee Ann Garrett of Provo, Utah; two sisters-in-law: Irene (Melvin) Loader, of Saratoga Springs, and Lois Lovell, of Taylorsville; 10 grandchildren, 27 great-grandchildren; and 4 great-great-grandchildren; plus 1 great-grandson, 2 great-great-granddaughters, and 1 great-great-grandson that will be born later in 2012. Funeral services will be held at 11:00 a.m., Monday, February 27, 2012 at the Pioneer 4th Ward Chapel, 376 North 700 West, Provo, Utah. Friends may call at the Berg Mortuary of Provo, 185 East Center Street, Sunday evening from 6 until 8 and at the church Monday from 9:30-10:45 a.m. prior to services. Interment, East Lawn Memorial Hills, Provo, Utah.

Albert (Bert) William Garrett, age 94, passed away at his home in Provo, Utah on February 20, 2012. Bert was born June 18, 1917 at the family home in Logan, Utah to William and Harriet Cooper Garrett. During his teenage years, he worked on ranches... View Obituary & Service Information

The family of Albert Garrett created this Life Tributes page to make it easy to share your memories.

Albert (Bert) William Garrett, age 94, passed away at his home...