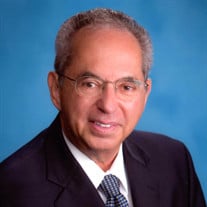 Alden B. Tueller, 82, husband, father, and grandfather passed away peacefully October 29, 2021 at Cove Point Retirement Community in Provo, Utah from Parkinson’s Disease and Lewy Body dementia. Alden was born on September 2, 1939 to Reed Owen Tueller and Eleanor Irene (Peggy) Biles Tueller in Pocatello, Idaho. He was the second of five children. He is survived by Nancy E. Tueller, his wife of 55 years, and three sons, Michael (Kori), Scot (Martha) and Lance (Valerie) and six grandchildren, Peter, Jessica, Margaret, Laura, Ryder and Ryley. Alden was preceded in death by his parents and all his siblings. Alden moved with his parents to Salt Lake City, Utah when he was six years old. He graduated from South High School and cum-laude from the University of Utah in mathematics. He then received a law degree from the University of California at Berkeley. Alden gained national reputation as a tax-exempt trust expert, being one of the country’s top practitioners in this field. He was co-founder and chairman of Premier Administration, a company specializing in charitable trust administration, and also founded the charitable and tax-exempt organization section of the estate-planning department for the law firm of Bennett Tueller Johnson & Deere in Salt Lake City. As a member of the bar in New York, California, Utah, Connecticut and Washington, he had a wealth of experience in designing, developing and administering thousands of tax-exempt trusts and organizations. He regularly consulted with financial professionals, donors, colleges, churches, hospitals and nonprofit organizations nationwide to assist them and their clients with tax exempt estate planning. He also wrote several books on the subject. Alden met his wife, Nancy, at Berkeley and they were married in the Oakland Temple of The Church of Jesus Christ of Latter-day Saints on August 12, 1966. They then moved east for nine years where Alden practiced law on Wall Street and later mid-town in New York City, then in Connecticut before returning to Utah. Alden then worked at BYU, Utah Valley Hospital and UVSC over several years as well as with his Trust administration business and his law firm. Alden was very active in his church serving many years in the scouting program and attended Wood Badge with his wife in the early 80’s. He served many years on the High Council and as Stake Executive Secretary of the Sharon East Stake and as a Bishop of a BYU ward. Alden was always very proud of his Swiss ancestry. After his grandfather’s family joined the church, they sent Alden’s grandfather, Christian, then 15 years old, to Utah. He was later joined by his parents and 12 siblings and his uncle and his 13 children. Brigham Young sent the Tuellers, along with other Swiss immigrants, to the Bear Lake area of Idaho as he thought the Swiss could handle the cold weather. The Tuellers soon became well known for their stone masonry work. They worked on several churches in the Bear Lake area. One of the most famous and beautiful was the Tabernacle in Paris, Idaho. They did the masonry work and Christian Tueller is mentioned in the brochure handed out to visitors. Special thanks for those who helped with Alden’s final days: Cove Point Retirement Community and Bristol Hospice services. Funeral services will be held at the Sharon East State Center, 2400 N 1060 E, Provo, Utah on Tuesday, Nov. 2, 2021 at 11:00 AM with viewing starting at 9:30 AM. Alden will be buried in the Paris, Idaho Cemetery. Condolences may be expressed to the family at www.bergmortuary.com. In lieu of flowers, donations may be made to the Utah chapter of the National Alliance for the Mentally Ill (NAMI) or the Church’s Perpetual Education Fund. Here is the link for streaming the service live: https://zoom.us/j/94806640891

The family of Alden B. Tueller created this Life Tributes page to make it easy to share your memories.

Send flowers to the Tueller family.