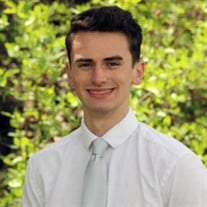 It is with extremely heavy hearts that we announce the untimely death of our beloved son, Alexander (Alex) Lee Nimer, on January 20, 2021. Alex was born on August 26, 2001 in Santa Rosa, California to Corwin (Cory) and Suzanne (née Miles) Nimer. He grew up in Provo, Utah, attending Farrer Elementary, the Center for Accelerated Studies (CAS), and Provo High School. In school he most enjoyed his classes in history, writing, and business. He also completed six years of German, becoming quite fluent. Beyond his core classes he actively participated in the Air Force Junior ROTC Program, DECA, the school’s orchestra and choir programs, and played Overwatch for the ESports Team. Growing up, Alex was deeply involved in Boy Scouts and the Provo East Stake youth program. In high school he served as the stake representative on the Provo High Seminary Council. He earned his Eagle rank at 14, and continued on to earn his Varsity Letter and Denali Award. He was inducted as a member of the Tu-Cubin-Noonie Lodge of the Order of the Arrow and served a term in the chapter leadership. For three years he also spent his summers at Camp Maple Dell teaching scouts nature courses. During this time he came to know Payson Canyon well, while still being able to come home to his family for weekends. After graduating in 2019, Alex received an Air Force scholarship to Utah State University in Logan, Utah. There he studied Management of Information Systems, while serving as a member of the Air Force ROTC 860 Detachment. On his 18th birthday he took the oath of enlistment and became an Airman First Class in the Air Force Reserve. He had passed his officer qualifying test in the fall and was looking forward to field training this coming summer. During his time in ROTC he and his flight earned top honors, and they grew to be his family away from home. Alex enjoyed spending time with his family and friends playing board games and online strategy games. He loved reading, singing, playing with our family dog, Bella, and just goofing around. Alex was a bright light in any group and a natural leader. He will be missed by all who knew him, and will never be forgotten. He is survived by his parents, his brothers, Geoffrey and Christian, and his sister, Lila. Funeral services will be held at 11:00 a.m., Friday, January 29, 2021 at the Provo Parkway 3rd Ward Chapel, 3111 West 1390 North, Provo, Utah. Friends may call at the Berg Mortuary of Provo, 185 East Center Street, Thursday, January 28 from 6-8:00 p.m. and at the church Friday from 10-10:50 a.m. prior to services. Interment, Provo City Cemetery. Condolences may be expressed to the family at www.bergmortuary.com. Service will be Live streamed two ways: Provoparkway3rd.com Zoom: https://us02web.zoom.us/j/83137145336?pwd=bk84dUduM0kvWlpzTlNCa1IrN3VOQT09 YouTube link: YouTube: http://www.provoparkway3rd.com/live

It is with extremely heavy hearts that we announce the untimely death of our beloved son, Alexander (Alex) Lee Nimer, on January 20, 2021. Alex was born on August 26, 2001 in Santa Rosa, California to Corwin (Cory) and Suzanne (née Miles) Nimer.... View Obituary & Service Information

The family of Alexander Lee Nimer created this Life Tributes page to make it easy to share your memories.

It is with extremely heavy hearts that we announce the untimely...

Send flowers to the Nimer family.