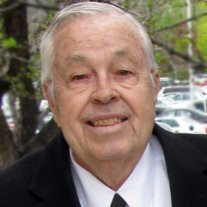 Early Friday morning on August 23, our loving father Alfred Max Fillmore of Orem, died peacefully at Orchard Park Care Center. Max was born in Payson in 1931 and later moved to Provo where he graduated from Provo High School and Brigham Young University. His childhood was the stuff of great adventure, and he often entertained his children with tales of his brother Charlie’s pranks and schemes. Max enlisted in the Navy during the Korean Conflict. After his naval career, he went on to become a printer and a salesman. Max competed in many sports, but his great love was golf, playing at BYU and becoming one of Utah’s top amateur golfers, winning club championships at Timpanogos, Cascade, Riverside, Tri-City and Alpine. A lifelong active member of the Church of Jesus Christ of Latter Day Saints, he served in many callings. He cared deeply about teaching the gospel. Max was a great example to his friends and family. He will long be remembered for his honesty, his quick mind and sense of humor, his love for people, and his absolute devotion to his family. He is survived by four siblings Afton, Marie, Charles and Carma along with his four children Cathy, Stuart, Brad and Robin and nine grandchildren. Funeral services will be held at 11:00 a.m., Wednesday, August 28, 2013 at the Sharon Park 6th Ward Chapel, 150 East 600 North, Orem, Utah. Friends may call from 9:30-10:45 a.m. prior to services. Interment, Payson City Cemetery. Condolences can be sent from his obituary at www.bergmortuary.com

The family of Alfred Max Fillmore created this Life Tributes page to make it easy to share your memories.

Send flowers to the Fillmore family.