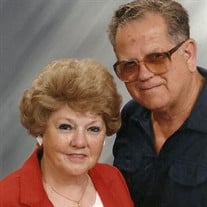 “Together Again” On August 10, 2016, Alice, age 92, re-joined her beloved husband Robert John Crane, who passed away on November 26, 2004. Alice was born on April 15, 1924 in Cardston, Alberta, Canada. She was the youngest of nine children born to Charles Neilson and Mary Alice Puzey. Alice grew up in the village of Mountain View in Alberta, Canada. At the age of 13 she moved with her family to White Salmon, Washington. It was there that she met and fell in love with “Curley” Crane who would become her future husband. Faced with the armed conflict of WWII, “Curley” left White Salmon to serve his Country in first, the US Coast Guard and later, in the US Navy. During a period of “leave” from WWII, Alice met Robert, the love of her life, in Portland, Oregon to be married. Alice Neilson and Robert Crane were married in a small ceremony in the town of Sherwood, Oregon on November 18, 1943. Later, they were sealed for time and all eternity in the Salt Lake LDS Temple. Following Robert’s release from the Navy, the young couple made their home in Portland, Oregon. As their family grew in size, Alice and Bob underwent several moves to larger homes, but remained within the Portland area and the growing suburb of Beaverton, Oregon. Alice and Robert had five sons. Their family was active in the LDS Church, sports programs and scouting. With the strong support of both Alice and Robert, all five sons earned the Eagle Scout Award. The family travelled extensively throughout the Pacific Northwest and Southern Canada. Robert worked as a Railway Postal Clerk and later as an Air Traffic Controller. With the exception of a few years, Alice remained within the Crane home and was a full-time mother. She is remembered as a very supportive and loving mother who nurtured and cared for her loving sons and was active in their school work and activities. Having raised their family at a young age, Alice and Bob found that upon retiring, they were still young enough to enter a new phase of life. Free from many of their responsibilities, they began a life of travel and service. Together, they served a full-time LDS mission, three Stake missions, visited seventeen foreign countries, the Caribbean, Alaska, the Hawaiian Islands and the Eastern Seaboard. In the course of these travels, they attended LDS Temples in many of the places they visited. During her life, Alice served in many church callings. These callings were principally in the Primary, Young Women’s and Relief Society. At one point, Alice was called to be a District Relief Society President. Being a young mother with five sons, Alice served in the scouting program as a Den Mother and spent many, many hours sewing patches on her growing son’s scout uniforms. Alice was a member of the Daughters of the American Revolution and attended many local, state and national events to help promote the goals of this organization. Alice is of pioneer stock. She was a member of the Daughters of the Utah Pioneers. Her ancestors were early settlers in Utah, arriving as early as 1857. Alice’s great-grandfather, Henry Puzey worked for Brigham Young’s brother, Joseph, and later, for Ben Holiday’s Overland Stage Company. Her great-grandfather, Joseph Pollard worked as a carpenter for Brigham Young. Alice is preceded in death by her husband, eight siblings and a great-grandson. She is survived by her children, John Crane (Austin, Texas), Stephen Crane (Spring Creek, Nevada), Christopher Crane (Titusville, New Jersey), Peter Crane (Provo, Utah) and James Crane (Washougal, Washington). Alice is also survived by 21 grandchildren, 33 great-grandchildren and 7 great-great-grandchildren. At Alice’s request, a viewing will be held from 6-8:00 p.m., Monday, August 15, 2016 at the Berg Drawing Room Chapel, 185 East Center Street, Provo, Utah. No funeral services will be held. Burial will be at Riverview Abbey, 319 Taylors Ferry Rd., Portland, Oregon. Condolences may be expressed at www.bergmortuary.com.

The family of Alice Neilson Crane created this Life Tributes page to make it easy to share your memories.

Send flowers to the Crane family.