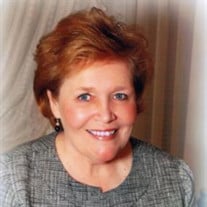 Alice Durrant, sister, aunt, and daughter, passed away in Sandy, Utah on June 2, 2020 at the Sunrise of Sandy Reminiscence Center. Alice was born September 1, 1947 in Provo, Utah, to Sterling John and Winifred Hansen Durrant, the second child and daughter in what became a family of six children. She grew up on the family dairy farm in west Provo. Before her graduation from Provo High School, she distinguished herself in the area of business and took concurrent courses at Utah Technical College, now UVSC, certifying as the fastest typist in the state of Utah. From 1969-70, Alice served a mission for The Church of Jesus Christ of Latter-day Saints in the Colombia-Venezuela Mission. She was a talented, fearless missionary, and saw many she taught come into Christ’s Church in spite of her difficulties with the Spanish language. She also served as mission secretary to President Stephen L. Brower. When she returned home, her clerical prowess made her sought after by BYU Press and the BYU geological department. She was also employed by the BYU Law School, and law firms in Portland, Oregon, Fairbanks and Juneau, Alaska. Alice had a gift for entrepreneurial enterprise. She was founder and CEO of Utah Women and Custom Captions for over 20 years and creator of the Kids Love It literacy program. She was Chair of Utah’s Women and Business Conference for two consecutive years and named as Utah’s Businesswoman of the Year. Alice served as President in the Relief Society, Primary, and Young Women’s in her various wards in The Church. She was a temple worker in the Provo Temple and a student of the scriptures. She did massive amounts of humanitarian work for women and children in impoverished countries – dresses, diapers, blankets, hygiene kits, and school bags, to name a few. Her charity was unstoppable. She traveled to Europe, Israel and Egypt, and the Scandinavian countries. She looked for ways to teach simple things in the moment and created Grand Memories for her nieces and nephews. She loved Rook and Mormon Bridge, quilts, ceramics, projects, Big Plans, cooking and entertaining. She treasured her friends such as Kris Arnold, the family’s “Number Seven,” and other choice and cherished friendships she made along her way. She cared for her widowed mother for over twenty years. She made good times special! Alice will be missed by her siblings: Catherine Tenney (Tom), Ernest Durrant (Laura), Patricia/Trish Weeter (Ben), Neil Durrant (Jolene), and John Henry Durrant (Vickie), and a boatload of nieces and nephews. She leaves behind three step-children. Both parents are deceased. She was a missionary, an entrepreneur, and a disciple of Christ, living the gospel faithfully and loving what she believed. A viewing will be held Friday, June 5, 2020 from 6-8:00 p.m. at the Berg Drawing Room Chapel, 185 East Center Street, Provo, Utah for family and friends. A visitation will be held there the following day, Saturday, June 6 at 10:00 a.m. prior to family services at 11:00 a.m., due to COVID-19 limitations. Her funeral services may be viewed afterward and condolences expressed at www.bergmortuary.com. If you want to watch it live on Zoom, please contact one of Alice’s siblings.

The family of Alice Durrant created this Life Tributes page to make it easy to share your memories.

Alice Durrant, sister, aunt, and daughter, passed away in Sandy,...

Send flowers to the Durrant family.