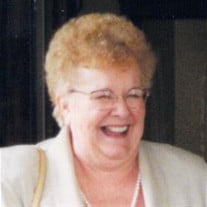 Alida Lorraine Frankman McDowell, 82, peacefully passed away Monday, June 22, 2015 in American Fork. Lorraine was born August 30, 1932, in the Ballard neighborhood of Seattle, Washington, the oldest of five children born to Alvas and Cemoria Frankman. Growing up in the Seattle area, she graduated from Foster High School and attended Central Washington University in Ellensburg, Washington and Brigham Young University in Provo. She afterward worked for Burroughs and Boeing in Seattle, where she met Irwin McDowell at church. The two were married for time and eternity on June 5, 1962 in the Los Angeles Temple, and subsequently moved to Hemet, California. Irwin and Lorraine had two girls, Lisa Joy, born in Seattle, and Marilyn Alida, born in Hemet. Lorraine was widowed while her daughters were still young, and worked hard to provide for her family, teaching integrity by example, and instilling in her daughters a love of the gospel of Jesus Christ. It was Lorraine’s testimony that caused her to serve in a variety of church callings. Always interested in learning and improving herself, she enjoyed passing along her knowledge by teaching early morning seminary for a number of years. As her children matured, Lorraine moved back to Seattle to watch over her father, and then came to Utah to again be with family. Lorraine is survived by her two children; Lisa Govers and Marilyn McDowell, four grandchildren, and four siblings; Barbara Papenfuss, Joy Carson, Al Frankman (Kathleen), and Carol Christensen. Funeral services will be held Friday, June 26, 2015 at 1:00 p.m. at the Jacobs Ranch 1st Ward Chapel, 267 West Weatherby Drive, Saratoga Springs, Utah. Family and friends are invited to a viewing from 11:30 a.m.-12:45 p.m. prior to services. Funeral services will be followed by interment at the Provo Cemetery. Condolences may be extended to the family at www.bergmortuary.com.

The family of Alida Lorraine Frankman McDowell created this Life Tributes page to make it easy to share your memories.

Send flowers to the McDowell family.