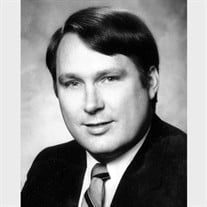 Allen Cummings Ludlow, 68, passed away Monday, November 30, 2020 at the Utah Valley Regional Medical Center following a sudden heart attack. He was born on September 17, 1952, to Robert Jones and Emily Louise Cummings Ludlow in Modesto, California. He was the fourth of five brothers in that family, who were Robert, Paul, Douglas, and David. As a faithful member of The Church of Jesus Christ of Latter-day Saints, Allen served a mission to Florida at the age of 19. He attended Brigham Young University where he met his future wife, Gretchen Meibos. They were married in the Oakland California Temple in 1974. He graduated from BYU with a Bachelor’s Degree in Accounting, and returned to Modesto to work in his father’s CPA firm. He soon earned his CPA certification and then started his own practice five years later. Allen and Gretchen are the parents of three children: Laura Anne Payne (Jeff); Kristy Lynn Jensen (Tom); and Allen Jeremy (AJ) Ludlow (JoAnna). There are also 13 grandchildren in the family. Allen developed a love for computers early on so that he could use them in his accounting profession. One of his first computers was a “portable” which must have weighed 30 pounds. He continued to love technology all his life. He served in numerous callings for his Church, often in Ward and Stake Clerk positions. He also loved serving as Stake Sports Director and his program was enjoyed by many. His service as a Branch President for a Hmong, Laotian, and Cambodian Congregation in the Modesto Area brought him great satisfaction. Allen and Gretchen moved to Utah in 2004 to be closer to their children and grandchildren. He later served as a counselor in a bishopric in a Utah Valley University Young Adult Ward. Allen’s most recent Church calling was as the Technology Specialist for his Ward. He enjoyed helping ward members with their technology problems and questions. He was a faithful BYU sports enthusiast, helping to found the Modesto chapter of the Cougar Club. As a student, he worked for the BYU ticket office and often got excellent seats to football and basketball games. He was excited to move back to Provo to be closer to BYU sports where he could participate in more Cougar Club activities. Allen’s favorite place to vacation was Lake Tahoe. The family spent almost every summer vacation in Tahoe enjoying the beautiful views of the lake and each other’s company. When Allen and Gretchen finally downsized from their Orem home and moved to a Provo condo, he served on the HOA board where he put their finances in order and contributed much service. Despite his professional success, his family and his faith have always been a source of joy and his primary focus. Allen is survived by his wife of 46 years, Gretchen Meibos Ludlow, and their three children and families. He was preceded in death by his parents. A memorial service will be held on Friday, December 4, 2020 at 11:00 a.m.at the Grandview 9th Ward Chapel, 1555 North 1350 West, Provo, Utah. Family and close friends are invited to attend. The service will be available for streaming via zoom: https://byu.zoom.us/j/94642332065 Condolences may be expressed to his family at www.bergmortuary.com.

The family of Allen Cummings Ludlow created this Life Tributes page to make it easy to share your memories.

Send flowers to the Ludlow family.