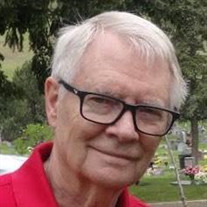 Alma Lindsay Carlisle passed away suddenly on the morning of May 29 after spending an enjoyable Memorial Day with family. He was born on February 11, 1937 in Salt Lake City to Edward Crandall Carlisle and Mercy Priscilla Lindsay. His mother passed away when he was only ten, then his father married Isabel Burton and the family moved to Manti. Al was very active at Manti High School, where he was involved in cheerleading, music and drama. He attended Snow College, graduated from USU in Psychology, then obtained a PhD in Clinical Psychology from BYU. He spent 20 years working at the Utah State Prison where he evaluated a number of serial killers including Ted Bundy. After his retirement from the prison, Al developed a career doing evaluations for Vocational Rehabilitation and Disability in Eastern Utah while continuing his research and interest in serial killers. Beginning at age 75, Al wrote several books about serial killers, including most notably one about his 1976 psychological assessment of Ted Bundy. As a Ted Bundy expert, he had recently done a number of interviews and podcasts for the 30th anniversary of Ted Bundy's execution next year. At the time of his death he was working on his fifth book. In spite of their subject matter, his books were not sensationalist, but rather conveyed a respect for and graciousness towards people, and a deep interest in why people would develop a violent mind. Al enjoyed being supportive of family and friends in whatever way that he could. He often used his insights to become a healer, listening to and looking for the good in people, and genuinely seeking to help others understand themselves. Because of this, many have called him their best friend, and the family has been touched by their stories. Alma was a faithful member of The Church of Jesus Christ of Latter-day Saints. He served a mission to England where he met his future wife, JoAnn Lindorff, who was also serving a mission there. They were married in the Salt Lake Temple, and had four children, each of whom also served missions. Al served in many church callings, and was always diligent in being a faithful home teacher. Alma was preceded in death by his wife, JoAnn, who died in 2014 after a long illness, and by his sister, Clarann Carlisle Jacobs Larsen, and step-brothers Thain and Clyde. He is survived by his brothers Lindsay (Carla) and David, daughter Charlene (Steve) Harmon and sons Steve (Tina), Rob (DeeAnne) and Tom (Colette). He is also survived by 17 grandchildren and 2 great-grandchildren. Funeral services will be held at 11 a.m., Saturday, June 9, 2018, at the Edgemont 4th Ward Chapel, 4056 N. 650 East, Provo, Utah. Friends may call at the church Friday, June 8 from 6 to 8 p.m. and Saturday from 9:30 to 10:45 a.m. prior to services. Interment, Eastlawn Memorial Hills. Condolences may be expressed at www.bergmortuary.com.

Alma Lindsay Carlisle passed away suddenly on the morning of May 29 after spending an enjoyable Memorial Day with family. He was born on February 11, 1937 in Salt Lake City to Edward Crandall Carlisle and Mercy Priscilla Lindsay. His mother... View Obituary & Service Information

The family of Alma Lindsay Carlisle created this Life Tributes page to make it easy to share your memories.

Alma Lindsay Carlisle passed away suddenly on the morning of...

Send flowers to the Carlisle family.