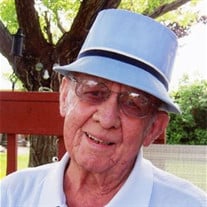 Beloved husband, father, and grandfather, Alma Robert Giles “Big Al” was born to Roy and LaDacy Giles on August 17, 1935 he was called home to be with his wife and son for a long awaited reunion on the morning of July 12, 2014. Alma spent his early years in Tabiona, Utah. The family then moved to Provo where he attended BY High School, and this is where he met the love of his life Joyce Nelson. They were married on August 6th, 1954. They moved to California where he worked in a Tire factory for several years before returning to Provo where he drove truck, and then began his career with Union Pacific Railroad where he worked his way up to Engineer, and later retired in 1997. Alma enjoyed his family and working in his immaculate yard. He loved spending time in the outdoors in his earlier years, and had a passion for music and collecting collectables in his later years. He is preceded in death by his wife Joyce, son Bobby, granddaughter Tara, his parents Roy and LaDacy. He is survived by daughters JoDeen (Mark) Deleski, Karen Lewis, and son Terry A. Giles (Jamie), sister Vida Kay, brothers Rex (Pat) Giles, Tom (Alyce) Giles, 7 grandchildren, and 13 great-grandchildren. In lieu of flowers the family requests donations in Alma’s name to the Utah Blind Association. A special thanks to the “I Care” staff (Bonnie, Ryan, and Burt) for all the care given in the last 2 years. Funeral services will be held on Thursday, July 17, 2014 at 11:00 a.m. in the Berg Mortuary Drawing Room Chapel, 185 East Center Street, Provo. Friends may call at the mortuary on Thursday morning from 9:30 until 10:45. Interment, Provo City Cemetery. Condolences may be sent online at www.bergmortuary.com.

The family of Alma Robert Giles created this Life Tributes page to make it easy to share your memories.

Send flowers to the Giles family.