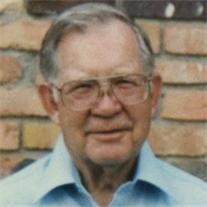 Alma John Richman, age 89, of Provo, Utah, returned peacefully to our Heavenly Father on January 31, 2013. He was born to Elmer John and Florence Richman on May 7, 1923, in Neola, Utah. While attending BYU he was asked to teach band at Altamont High School where he met a brown haired girl named Jeanne Goodrich. He was asked to teach school permanently, but felt that he should serve his country in WWII with his two brothers. He served in the United States Navy in New Guinea and the Philippines. He loved the United States of America. After the war, Alma and Jeanne were married in the Salt Lake Temple. Alma served faithfully in many callings in the LDS Church. He loved his Heavenly Father and Savior, Jesus Christ. He knew that families are forever and he looked forward to being with his parents and other loved ones again. Alma loved people and went out of his way to help and serve others. Alma worked 36 years at Geneva Steel. He had strong work standards that were admired by all. He loved the outdoors, camping, hunting and fishing. He always respected nature and taught us to leave a place better than we found it. Music has always been important to Alma. He often taught classes while in high school if the teacher wasn't there. He played in bands starting in high school, during the war and throughout his life. He played the bass fiddle and the sousaphone in bands, parades, Utah Valley Symphony and many operas at BYU and other programs. He is survived by his loving wife of 66 years, Jeanne; his children Helen (Brad) Prescott, Greg (Debra) Richman, Kevin (Mylene) Richman, and Teri (Gary) Mortensen; 17 grandchildren and 25 great-grandchildren; siblings Ed and Sandy Richman and Melba Turner. He was preceded in death by his brother Weldon Richman and grandson Weston Richman. Sincere thanks to Julie and Jim of Rocky Mountain Hospice and the staff at Golden Living for the kind and tender care given to dad. Funeral services will be held at 12:00 noon, Monday, February 4, 2013 at the Edgemont 2nd Ward Chapel, 555 East 3230 North, Provo. Friends may call at the Berg Mortuary of Provo, 185 East Center Street, Sunday evening from 6 until 8 and at the church Monday from 10:30-11:45 a.m. prior to services. Interment will be in East Lawn Memorial Hills, Provo, Utah. Condolences may be sent through his obituary at www.bergmortuary.com.

Alma John Richman, age 89, of Provo, Utah, returned peacefully to our Heavenly Father on January 31, 2013. He was born to Elmer John and Florence Richman on May 7, 1923, in Neola, Utah. While attending BYU he was asked to teach band at Altamont... View Obituary & Service Information

The family of Alma Richman created this Life Tributes page to make it easy to share your memories.

Send flowers to the Richman family.