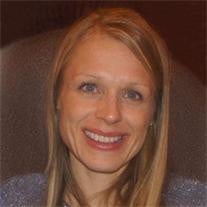 Amy Laurice Gibson McClean, of Provo, was called to her Heavenly home Tuesday, July 23, 2013, where she was also reunited with her earthly parents, Mark "J" and Delsene Leany Gibson, who preceded her in death. Amy fought a brief, but valiant, battle with lung cancer. Amy was born December 21, 1974 in Henderson, Nevada. She was welcomed as a very loved and loving baby sister, the youngest of 9 children. Amy lived in Las Vegas until she graduated from Bonanza High School. She then continued her education in Provo, Utah at Brigham Young University where she earned her Bachelor's degree and became a Registered Dietitian/ Nutritionist. While there she met the love of her life, Matthew Ryan McClean. They were married December 28, 1996, in the LDS Temple in Salt Lake City, Utah. Matt and Amy moved to Los Angeles, where Amy worked as a Registered Dietitian while Matt completed his education to become a Chiropractic Physician. They welcomed their first daughter, Madilyn (12) while living there. They returned to Provo where Matt started his practice of Chiropractic joining the family owned practice of McClean Chiropractic with his father and brother. Soon the rest of their children joined them: Katelyn (10), Ashlyn (6), Brendan (3), and Quinton (16 months). During her lifetime, Amy's greatest joy was her family, both immediate and extended. She exemplified this in part by teaching her children at home where they developed a thirst for knowledge and a love for learning under her watchful eye and tender care. She was a very talented homemaker, and an amazing cook. Together with Matt, she developed many healthy and YUMMY foods especially using naturally leavened breads. Together, they taught classes on this method of cooking and eating which they developed after exhaustive research and practice. Amy enjoyed her home with her family, where they spent many hours in the garden, which she thought of as her own Garden of Eden. She sometimes called it her Garden of Eating. She also loved to spend time in the outdoors, hiking and camping. As a valiant follower of Jesus Christ, she showed love and charity toward all. She was loved by all who knew her. She had a way of making everyone feel loved, and she always made sure everyone was taken care of before herself. She touched the lives of many through her testimony and her shining example of love for her Savior and all she came in contact with. Amy served in many callings of responsibility in the church including in the presidencies of Primary, Young Women's, and Relief Society in both the ward and stake. Her most recent calling has been an Activity Day Leader. She was a very talented, willing and able servant. Amy is survived by the loves of her life, her husband and five children; siblings, Linda (Glade, deceased) McArthur, Gary (Marla), Alan (Lorene), Dale (Stephanie), Julie (Gene) Spendlove, David (Cristy), Kent (Andra), and Robert (Kathy); many nieces, nephews, cousins, grandnieces and grandnephews who all loved when Amy was around. Funeral services will be held at 11:00 a.m., Saturday, July 27, 2013 at the Slate Canyon 15th Ward Chapel, 1315 East 900 South, Provo, Utah. Friends may call at the Berg Mortuary of Provo, 185 East Center Street, Friday from 6:30-8:30 p.m. and at the church Saturday from 9:30-10:45 a.m. prior to services. Interment will be in the Provo City Cemetery. Condolences may be sent through her obituary at www.bergmortuary.com.

Amy Laurice Gibson McClean, of Provo, was called to her Heavenly home Tuesday, July 23, 2013, where she was also reunited with her earthly parents, Mark "J" and Delsene Leany Gibson, who preceded her in death. Amy fought a brief, but valiant,... View Obituary & Service Information

The family of Amy Gibson McClean created this Life Tributes page to make it easy to share your memories.

Amy Laurice Gibson McClean, of Provo, was called to her Heavenly...