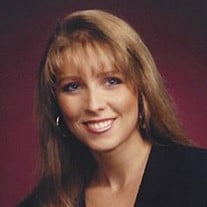 Amy J. McClean Tucker, age 51, passed away peacefully on April 13, 2019 at the Huntsman Cancer Institute in Salt Lake City after a long and courageous battle with Leukemia. She was born January 9, 1968, in Davenport, Iowa to Gordon (Jr.) and Cheri (Jensen) McClean. Amy grew up first in Lindon, then later in Provo, Utah. She was a graduate of Provo High School and Brigham Young University. At age 21, Amy served as a missionary in the Rome, Italy mission where she built many lasting relationships. On April 10, 1993, she married Matthew Tucker in the Salt Lake Temple, and together they raised two daughters, Rachael and Brinley. Amy was the oldest of six siblings, and she was deeply loyal to her family. She spent many years working at McClean Clinic where she contributed greatly to the stability and growth of the family practice. Above all, Amy was kind. She took an active interest in the well-being of every person she encountered. Amy was a patient person who needed little from others but willingly gave of her time and energy. She also enjoyed cooking, gardening and traveling with her family. Amy is survived by parents Gordon and Cheri; siblings Todd, Devin, Matt, Melissa and Steve; her husband of 26 years, Matt; daughters Rachael (Oliver) and Brinley; grandson Kolby and many nieces and nephews. The family would like to extend their gratitude to all of the staff at Huntsman Cancer Institute for their attentiveness and loving care. Floral arrangements are provided by Springville Floral & Gift. Funeral services will be held on Saturday, April 20, 2019 at 11:00 a.m. in the Hobble Creek 15th Ward Chapel, 2379 East River Bottom Road (1100 South), Springville, Utah. The family will receive friends on Friday, April 19, 2019 at the Berg Mortuary of Provo, 185 East Center Street, from 6:00-8:00 p.m. and at the church Saturday from 9:30-10:30 a.m. prior to services. Interment will be in the Provo City Cemetery. Condolences may be expressed to the family at www.bergmortuary.com.

Amy J. McClean Tucker, age 51, passed away peacefully on April 13, 2019 at the Huntsman Cancer Institute in Salt Lake City after a long and courageous battle with Leukemia. She was born January 9, 1968, in Davenport, Iowa to Gordon (Jr.) and... View Obituary & Service Information

The family of Amy J. McClean Tucker created this Life Tributes page to make it easy to share your memories.

Send flowers to the Tucker family.