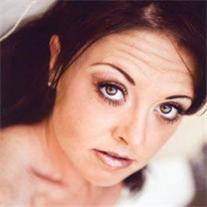 Amy Nicole Peck, loving wife, mother, daughter, sister, and friend passed away at home in Provo, UT on May 16, 2013. Amy was born in Price, UT on March 28, 1981 to Robert Lee and Marilyn Tipton Peck. As soon as she entered this world it was apparent that she was someone special and would make an impact on everyone she met. Amy's love for travel was only equaled by that of dance, a passion she found at the age of 5 which led to her becoming Sterling Scholar at Timpview High School in 1999. After studying Horticulture and Landscape Architecture at Utah State University, she joined the family business, GEL, Inc. In 2008, Amy married the love of her life, Shane Doyle Smith, and in doing so received the blessing of two wonderful children, Shelby Faye and Cole Shane Smith. After being joined by their youngest kids, Danny Lee and Marie Lynn Smith, their family was complete. Amy loved nothing more than being a stay at home mom and could always be found in the kitchen, cooking for her family. From early on Amy understood that family was the most important thing in life. Whether it was a family fishing trip, making Thanksgiving dinner with Grandpa Peck, or playing John Wayne with Grandpa Tipton, her favorite activities revolved around bringing everyone closer together. Amy will be forever missed by her husband, Shane; children, Shelby (15), Cole (14), Danny (2), and Marie (10 months); parents Robert & Marilyn; sister, Samantha; and grandmother, Sarah Loretta Tipton; as well as many aunts, uncles, and cousins. Amy was the granddaughter of the late Robert Earl Tipton, Donald J Peck and Catherine Peck. Funeral services will be held at 11:00 a.m., Wednesday, May 22, 2013 at the Berg Drawing Room Chapel, 185 East Center Street, Provo, Utah. Friends may call at the mortuary Tuesday from 6-8:00 p.m. and Wednesday one hour prior to services. Interment, Provo City Cemetery. Condolences may be sent through her obituary at www.bergmortuary.com.

Amy Nicole Peck, loving wife, mother, daughter, sister, and friend passed away at home in Provo, UT on May 16, 2013. Amy was born in Price, UT on March 28, 1981 to Robert Lee and Marilyn Tipton Peck. As soon as she entered this world it was... View Obituary & Service Information

The family of Amy Peck created this Life Tributes page to make it easy to share your memories.

Send flowers to the Peck family.