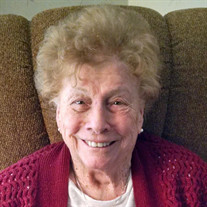 Anagene loved people, and people loved Anagene. She was our angel mother, grandmother, sister, and aunt, giving generously of her time, talents and considerable resources. Anagene was born on Dec. 28, 1925 in Sandy, Utah to Alice Elizabeth Brown and Thomas Charles Davies. Anagene had three siblings, John Thomas (Jack) Davies, Victor Lewis Davies, and Nadine Davies Williams. She died on Dec. 15, 2015 in Provo, Utah surrounded by her loving children. Having nearly made it to her 90th birthday, Anagene had a full life. From an early age she had a knack for making friends and making things happen. She was a cheerleader and student-body officer at Provo High School. She then worked as a school secretary and registrar in the Provo School District. Having served on numerous committees and boards throughout the State of Utah, she was asked to run for public office where she served 3 terms as Provo City Commissioner and City Councilwoman, earning the nickname “Mother of Provo.” Anagene gave of her time in both church callings and as a hospital Pink Lady. She also served a 2 year church mission as an Employment Specialist and as an MTC volunteer. She loved traveling and exploring the U.S. from coast to coast as well as numerous countries abroad. Anagene was widowed four times having been married to Elmo V. Meecham, the father of her 3 children: Christine G. Meecham, Susan M. Morse, and Thomas G. Meecham. Later she married Milford C. Cottrell, Harland D. Olsen, and Boyd C. Roberts, each adding another rich chapter to her life. She is survived by her beloved sister, 3 children, daughter-in-law, 9 grandchildren, 21 great-grandchildren, and numerous step-children, nieces and nephews. Anagene touched many lives and was enriched by the relationships she had with her family and many friends. To the very end she was appreciative and grateful for the life she lived. Funeral services will be held at 11:00 a.m., Tuesday, December 29, 2015 at the Edgemont 9th Ward Chapel, 4300 North Canyon Road, Provo, Utah. Friends may call at the Berg Mortuary of Provo, 185 East Center Street, Monday, December 28, 2015 from 5-7:00 p.m. and at the church Tuesday from 9:30-10:45 a.m. prior to services. Interment will be in the Provo City Cemetery. Condolences may be extended to the family at www.bergmortuary.com.

The family of Anagene Davies Roberts created this Life Tributes page to make it easy to share your memories.

Anagene loved people, and people loved Anagene. She was our angel...

Send flowers to the Roberts family.