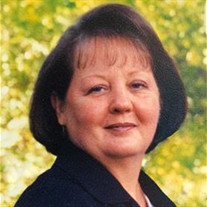 Angela Baldwin Daley, age 65, peacefully returned home to our Heavenly Father on September 16, 2019. Angela was born January 29, 1954 in Cedar City, Utah to Donald L. and Carene Ivie Baldwin. Angela was raised in Manderfield, Utah and at the age of thirteen her family moved to Beaver, Utah. She graduated from Beaver high school and later went on to cosmetology school where she helped support her family. Angela married Mark J. Daley on December 4, 1976 in Elko, Nevada and they were later sealed in the Manti Temple in January 1978. The two later divorced in 2008. Together they have five beautiful children. Angela was a faithful member of The Church of Jesus Christ of Latter-day Saints; she had many callings in the church from being a dedicated visiting teacher to a primary teacher, which she enjoyed the most. Angela loved her family, her kids, and her grandchildren very much. Family was always first. Angela was known for her cooking−her homemade bread, cinnamon rolls, and at Christmas time, her sweets−consisting of chocolates, mints. She made sure you didn’t leave her house hungry. Angela had many hobbies, she was amazing at flower arranging, scrapbooking, and had a green thumb for gardening and her flower beds. Mom made friends wherever she went. She loved being around others and hated it when you would have to leave; but most of all she was a friend to all and loved everyone. Angela is survived by her children: Julye (Jason) Cox of Firestone, Colorado; Michael (Megan) Daley of Provo, Utah; Jeramy Daley of Orem, Utah; Scott (Gina) Daley of Provo, Utah; and Malissa (James) Taylor of Loa, Utah; 11 grandchildren; her siblings Terry (Terri Lynn) Baldwin of Cedar City, Utah; and Kim (Greg) Solberg of Beaver, Utah. Angela is preceded in death by her parents, Donald L. and Carene Ivie Baldwin, brother, Morgan Baldwin, and granddaughter, Berkley J. Cox. Funeral services will be held at 11:00 a.m., Friday, September 20, 2019 at the Berg Drawing Room Chapel, 195 East Center Street, Provo, Utah. Friends may visit with the family from 9:30-10:50 a.m. prior to services. Interment, Provo City Cemetery. Condolences may be expressed at www.bergmortuary.com. In lieu of flowers, Angela requested donations be made to the American Liver Foundation.

The family of Angela Baldwin Daley created this Life Tributes page to make it easy to share your memories.

Send flowers to the Daley family.