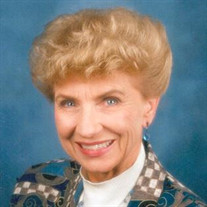 Ann Halgren Wiest Bushnell Smith passed away of natural causes January 21, 2020. Even in the last days of her temporal progression, Ann displayed the grace, thoughtfulness, and a cheerful laugh that served her and others so well. She had the ability to light up a room and with that same illumination, ignite the soul of the individual. Born in 1925 in Ogden, Utah to Sarah Alice Aldous and Joseph Halgren, Ann was raised in very humble circumstances during the depression in Cornish, Utah; the youngest of six brothers and sisters. In her early teens, her family moved to Salt Lake City where she graduated from East High. She attended BYU where she was part of the first women’s cheer organization that later became known as the Cougarettes. While in Provo, she met and married Dr. Clinton Wiest in the Salt Lake Temple, April 20, 1949. They settled in Provo in the “Tree Streets,” just east of the BYU campus, where they raised five children. As couples, the Wiest family and the Bushnell family (also from the “Tree Streets” in Provo) enjoyed traveling as well as serving in their Church together. In 1992, Clint passed away and left Ann a widow at 65 years young. One of Ann’s best friends, Lucille Bushnell, also suffered a premature passing. So not long afterwards, what was once a deep friendship became a loving romance and Merrill and Ann were married in 1998 in the Mount Timpanogos Temple. They enjoyed 11 years of a blended marriage. In 2009, Merrill suddenly passed, leaving Ann a relatively young widow again. Getting married again was the furthest thing in her mind until a widower, (Yes, also from the “Tree Streets”), Dr. Thales Smith, came into her life. They eloped to the Draper Temple in 2011. What a wonderful way to live the twilight of your years with people that fill your life with joy and love! Coming from simple beginnings, Ann always looked toward the future with hope and anticipation. This was her charm and talent. When things seemed insurmountable, she would say, “This too will pass.” And her pretty, blue eyes would twinkle with anticipation for better outcomes. This faith was rooted in the gospel of Jesus Christ, she firmly followed and believed. She taught her children about the gift of the Atonement and how we can use it to better our lives. The restored gospel of The Church of Jesus Christ was central to her life and most important after her family. She knows that God lives and she loves her Savior. And she wanted all of her children, both fraternally and blended, to enjoy the same eternal blessings she cherished. She taught the greatest joy on this earth comes from unconditional love and silent service to our fellow man. While serving as her bishop, her husband Clint called her as the ward young women’s president. She questioned his inspiration, but accepted. This began a lifelong association with young women on both the ward and stake level. She was called as stake young women’s president once and ward young women president three times—the last time at the age of 71! Her last girls’ camp was in her 76th year. The constant theme of her life was connecting with the one. She was an anchor to many young women and was always reaching out to the one who felt on the outside or disengaged. One of the more amazing outcomes of her life is her ability to love, adapt and improve on her personal relationships. She was beyond blessed to marry three outstanding, yet uniquely different men. All three had their talents, intelligence, and capabilities. But the common denominator was they all had a firm testimony of the Savior, they all had the innate ability to connect with people, and they all loved Ann. She complemented each one of her husbands and helped make their lives and the lives of their children more full. There aren’t too many people on this earth who can claim that blessing. She is survived by her children, Annette (Ron) Perry, Doug (Cheri) Wiest, Gary (Sharon) Wiest, Mark (Dana) Wiest, and Steven (Melissa) Wiest, in addition to 38 grandchildren and 41 great-grandchildren. She was blessed with two additional “Bonus Families” with first, Bruce (Karie) Bushnell, Ned (Marianne) Bushnell, and Pam (David) Price, with their 30 grandchildren and 28 great-grandchildren. And completing the circle are Patricia Janssen, Thales Jr. (Laura) Smith, Sandy (Steve) Francom, Stephanie (Lee) Berge, Steve (Klyss) Smith, Lisa (Jeff) Elder, and Greg Smith; 25 grandchildren and 71 great-grandchildren. For a total of 25 children, 93 grandchildren, and 140 great-grandchildren. Whew!! She had an incredible capacity to know and love them all. She is preceded in death by three husbands: Dr. Clinton Wiest, Merrill Bushnell, and Dr. Thales Smith; and five brothers and sisters: Joe (Bernice) Halgren, David (Margo) Halgren, Leon (Barbara) Halgren, Aldous (Russ) Larsen, and Alice Roberts. Funeral services will be held at 12:00 noon, Saturday, January 25, 2020 at the Pleasant View 6th Ward Chapel, 2445 North 650 East, Provo, Utah. Friends may visit with the family at the Berg Mortuary of Provo, 185 East Center Street, Friday, January 24 from 6-8:00 p.m. and at the church Saturday from 10:30-11:45 a.m. prior to services. Interment, Eastlawn Memorial Hills. Condolences may be expressed at www.bergmortuary.com. Thank you, Mom! Your light lives within each of us eternally.

Ann Halgren Wiest Bushnell Smith passed away of natural causes January 21, 2020. Even in the last days of her temporal progression, Ann displayed the grace, thoughtfulness, and a cheerful laugh that served her and others so well. She had the... View Obituary & Service Information

The family of Ann Wiest Bushnell Smith created this Life Tributes page to make it easy to share your memories.