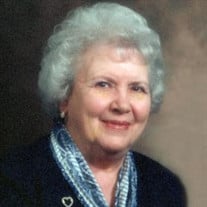 Anna Stucki Wakefield was born December 23, 1921 in Paris, Idaho. She grew up in Rexburg, Idaho where she graduated from Madison High School and Ricks College. Following Ricks College, she taught typing and shorthand and led the Glee Club at Moreland High School. She then attended and graduated from BYU. Following her college graduation, Anna served as secretary to Brigham Young University President Howard S. McDonald during a great surge in student enrollment in the years immediately following World War II. Known for her extraordinary skills in typing and shorthand, Anna also taught these subjects in the business department at BYU. On June 21, 1946, Anna married Leland Bert Wakefield, a recently returned WWII veteran who was studying business at BYU. Leland founded and managed a retail store in downtown Provo; Wakefield’s, Inc.. This business existed for forty years; a well known place to buy pianos, band and orchestra instruments, sheet music, TV and radios, lawn mowers and appliances. Anna capably helped Wakefield’s behind the scenes by serving as bookkeeper all the years the store was in operation. One of the greatest joys of Anna’s life was her active service in church. She had callings in her ward and stake as a Primary and Relief Society teacher, and President. Perhaps Anna’s greatest joy in faithful church service was her dedication working at the Provo Temple of the LDS Church for thirty-five years. She had a very strong testimony of the work of the Temple. Anna always loved music in many forms: playing the piano, singing with the Madsen Memorial Chorus and attending musicals at BYU, in Logan and New York City. Anna was known for her warm and friendly outgoing manner–she will be greatly missed. She was devoted to her family. She was preceded in death by her husband, Leland; her brother, Lund and parents, Ezra and Erma Stucki. She is survived by a sister, Lila Lawrence of Rexburg, ID and a brother, John Stucki of Ballwin, MO. Leland and Anna were blessed with three children: Susan (Rick) Wakefield Dal Porto of Roselle, IL Annalee Kennedy of Pleasant Grove, UT and Neil (Suzy) Wakefield of Orem, UT and nine grandchildren: Kolby, Ashley (Patching), Lauran (Kriek) Wakefield - Daniel, Matthew, Jessica and Ryan Kennedy, Michael and Kellie Dal Porto, and six great grandchildren: Kiean, Kole, Brooklyn and Collin Patching and Maddox and Xander Kriek. Funeral services will be held at 11:00 a.m., Saturday, December 17, 2016 at the Pleasant View 5th Ward Chapel, 1060 East 2400 North, Provo, Utah. Friends may call at the church Friday, December 16, from 6-8:00 p.m. and Saturday from 9:30-10:45 a.m. prior to services. Interment, Provo City Cemetery. Condolences may be expressed at www.bergmortuary.com.

Anna Stucki Wakefield was born December 23, 1921 in Paris, Idaho. She grew up in Rexburg, Idaho where she graduated from Madison High School and Ricks College. Following Ricks College, she taught typing and shorthand and led the Glee Club at... View Obituary & Service Information

The family of Anna Stucki Wakefield created this Life Tributes page to make it easy to share your memories.

Send flowers to the Wakefield family.