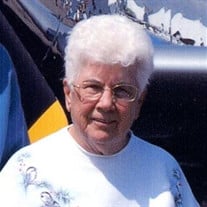 Annabelle Fry Daniels passed away Sunday, February 22, 2015 in Provo, Utah. She was born June 19, 1925 in Kokomo, Indiana to Austin and Ethel Land Fry. She married Paul J. Daniels of Provo, Utah in Long Beach, California on Sept. 26, 1944 after only knowing him for a few weeks. Annabelle returned to Provo to live with Pauls' family while he went to war on a Navy destroyer. As a Navy wife, she lived in many states. Annabelle is survived by three children: Cassondra Asay of Aurora, Colorado; Steven Paul Daniels and David James Daniels of Provo, Utah; sister-in-law, Marilyn Daniels of Provo, Utah; four grandchildren: Kelly Daniels, Jennifer Ann Enrietti, Sarah June Crain and Jasen Richard Asay; and six great-grandchildren. She was preceded in death by her husband, who passed in 2010. She worked as a telephone operator and a sales girl in a department store, but most of her life she was a stay at home mom for which her children were most grateful. She enjoyed sewing, knitting, ceramics and crafts. She also enjoyed going for Sunday drives with Paul in his many sport cars. Graveside services will be held on Thursday, February 26, 2015 at 12:00 noon at the Provo City Cemetery, 610 South State Street, Provo, Utah. Friends may call at the Berg Mortuary of Provo, 185 East Center Street, from 10:30-11:45 a.m. prior to services at the cemetery. Condolences may be sent online at www.bergmortuary.com. We would like to thank Courtyard at Jamestown for taking such good care of her for the past 4 years, and for the hospice care nurses, doctors and aides who took such good care of her these last few weeks.

The family of Annnabelle Fry Daniels created this Life Tributes page to make it easy to share your memories.

Send flowers to the Daniels family.