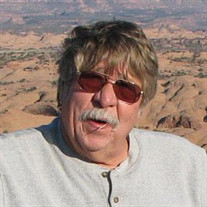 Tony DeMarco passed away on Friday, January 13, 2017, in Provo, Utah, surrounded by his family. He was born on January 13, 1941 in Rock Springs, Wyoming to Anthony and Lucille DeMarco. Tony was raised in American Fork, Utah, and graduated from American Fork High School. He also graduated from Utah Valley Technical College in Provo as a Machinist. Tony worked hard all of his life. He began his career with United States Steel Corporation at Atlantic City Ore Mine near Lander, Wyoming in 1960. He also worked at Geneva, Gary Works (Indiana), and Fairfield Works (Alabama) before retiring from U.S. Steel in 1990. He returned to Orem to work with the Geneva Steel Company until 1998. He operated a machine shop with Glunt Industries in Lindon, and most recently was self-employed as regional engineering representative for Superbolt and Nordlock. Tony loved life and lived with gusto. He was an avid outdoorsman. He enjoyed hunting and fishing in Wyoming, bird hunting in Nebraska, and fishing in Alaska. He raced snowmobiles; he loved the mountains and the snow. The home of his heart was Wyoming, and he traveled there often. Tony had a love for people and made friends everywhere he went. He was an engaging storyteller and could always make a connection with others by sharing his experiences. His brother said that if you had an elephant, Tony had a sack to put it in. He had a strong sense of humor and positive outlook. On good days and bad, he would always make you laugh, he made every day seem just a little brighter and better. His heart was as big as a bucket; he was generous in helping others, family, friends and strangers alike. Tony valued family over all else. He had great love for all of his family, and there was nothing he would not have done for them. He sacrificed and supported us in every endeavor, always putting us first. Tony married Jolene Huggard in 1960 (divorced); they had three children, Gina (American Fork), Rob (American Fork) and Jeff (Courtnee, Pleasant Grove). He is also survived by his wife Heidi, and their children, Michael (Emilie, Springville), Angie (Salt Lake City), Sophie (Springville), Adam Thomson (Sandy, Lehi), a step-son, 12 grandchildren, and three brothers, Bob (Sue, American Fork), Mike (Myra, Alabama), and Ken (American Fork). He was preceded in death by his parents. Tony always said he wasn’t book smart, but he had an innate intelligence and wisdom he never gave himself credit for; he was always the one we went to for advice, for help or strength. He was a leader, a teacher, an example, and a friend to all who knew him. He remains the greatest man we know; our lives are diminished without his presence. We love him and miss him dearly. Funeral services will be held at 11:00 a.m., Friday, January 20, 2017 at the Berg Drawing Room Chapel, 185 East Center Street, Provo, Utah. Viewings will be held at the mortuary Thursday, January 19, from 6-8:00 p.m. and Friday from 9:30-10:45 a.m. prior to services. Interment will be at Eastlawn Memorial Hills Cemetery in Provo. Condolences may be expressed at www.bergmortuary.com.

Tony DeMarco passed away on Friday, January 13, 2017, in Provo, Utah, surrounded by his family. He was born on January 13, 1941 in Rock Springs, Wyoming to Anthony and Lucille DeMarco. Tony was raised in American Fork, Utah, and graduated from... View Obituary & Service Information

The family of Anthony Albert DeMarco Jr. created this Life Tributes page to make it easy to share your memories.

Send flowers to the DeMarco family.