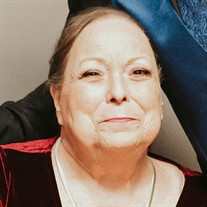 Arline Spencer Matina-Starr was born on March 11, 1951 in Elizabethtown, KY. As a multi-talented woman, she sang soprano, delighted in exploring the culinary arts, practiced needlepoint and played the piano. Her life took her all throughout the mid-west, Florida, Texas, California, Samoa, Europe and finally to Orem/Provo, Utah. Much like her mother, she was an avid reader and could always be found with her Kindle in hand enjoying book after book. She loved colors as bright as her personality and flavors as exotic as her travels. Her true joy was being a devoted mother to her sons, Donny and Levi Starr. After retiring in 2013 as a records clerk for the U.S. Government, Arline left Nebraska and headed west to central California to be closer to her son, Donny, and his family. In 2014, she suffered a decline in health and moved to Oceanside, CA to have the comfort of family-care. There, she lived with her sister, Leilani Mauga, as well as her nieces and nephews (Hana Mauga, Seth Mauga, Moana Mauga-Ngatuvai, Ezekiel Mauga and Ike Mauga). After a fire-disaster in 2018, she relocated one last time, alongside her Mauga family, to Utah County. Before her parting, she was able to see her son (Levi) become a husband and enjoy spoiling her great-nieces, Moana and Hina Ngatuvai. She will be greatly missed, but we are comforted by the knowledge that on May 11, 2019 she was greeted in our Heavenly Father's home by Julia Blackburn-Matina (mother), Seakelise Matina (father), Moana Matina (sister), Paul Matina (brother), Mark Matina (brother), and Peter Matina (brother). Until we meet again, she will be remembered by her remaining family members here on earth.

Arline Spencer Matina-Starr was born on March 11, 1951 in Elizabethtown, KY. As a multi-talented woman, she sang soprano, delighted in exploring the culinary arts, practiced needlepoint and played the piano. Her life took her all throughout... View Obituary & Service Information

The family of Arline Spencer Matina-Starr created this Life Tributes page to make it easy to share your memories.

Arline Spencer Matina-Starr was born on March 11, 1951 in Elizabethtown,...

Send flowers to the Matina-Starr family.