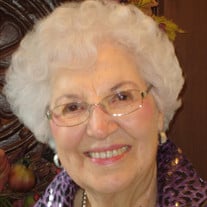 Barbara F. Hulme, 91, eternal companion, beloved sister, devoted mother and adored grandmother (Nanny), passed away quietly in her home April 17, 2015. Barbara was born May 16, 1923 in Kamas, Utah, the only daughter of four children to Franklin J. and Madeline McCormick Fitzgerald. She grew up on a farm so she knew how to work hard. She attended school in Kamas, UT and graduated from South Summit High School at the age of 16. She was active in drama and the pep club and also played saxophone in the school band. She was the first queen of Kamas Valley and then went on to attend Utah State University on a scholarship, becoming vice-president of her Freshman class. Barbara married her college sweetheart, David K. Hulme, on May 12, 1943 in the Salt Lake LDS Temple. They lived in Chicago for 4 ½ years where David was a Captain in the US Army, stationed at the Chicago Quarter Master Depot during WWII. He always said that the best decision he ever made in his life was to marry Barbara. After WWII, the family had a home in Salt Lake City, UT prior to moving to California to pursue employment opportunities. They loved living in the San Francisco Bay Area for 40 years where their 4 children were raised and where they made life-long friends. Barbara was very involved in the community and served as Chairman of the March of Dimes and as PTA President of Kensington Hilltop Elementary School, achieving an Honorary Life Membership from the California Congress of Parents and Teachers for her work with the youth. She and David even received an award from El Cerrito High School for being the most supportive parents. She worked by David’s side in his accounting office while the children were in school and attended classes at Contra Costa College where she was President of the Home Economics Club. In her limited spare time, she had a position at the University of California at Berkeley as an Administrative Assistant of the Society of Sigma Xi Fraternity where she kept the records and planned activities. When David retired in 1986 they moved to Provo, UT with a home also in Sun Lakes, AZ. Barbara was very active in the LDS Church all of her life, holding positions in the Primary, Young Women and Relief Society, including being a bishop’s wife. She especially enjoyed serving in the Oakland, Mesa, and Provo Temples for several years. She was a church service missionary at the Provo MTC putting her drama skills to good use as she pretended to be an investigator for the missionaries to practice their teaching. She had a deep, strong testimony of Jesus Christ and an unwavering devotion to the Church. Her home was always open to friends. She wanted everyone to be well-fed and comfortable. Her homemaking skills were a daily blessing to her family. She was an excellent cook, a perfect hostess, and an amazing seamstress. She made many of her own clothes for herself and her children. Her decorating skills were incredible and her home was always beautiful. Barbara loved learning and was always taking classes. She studied everything from flower arranging and painting to tailoring and computers. She took good care of herself and learned a lot about good health practices. Many of her friends called her Dr. Barbara because she helped them with what she had learned. David and Barbara have established two endowment funds at Utah State University, in the College of Family Life and in the School of Accountancy in the College of Business. Two students receive a scholarship on an annual basis. David and Barbara are members of the Old Main Society and the Big Blue Club at Utah State. They have also been members of the Cougar Club at BYU for over 30 years. All four children graduated from BYU. Barbara had desires to serve the Church and the community and to be a good mother. She took her role as a wife, mother and grandmother very seriously. She was a beautiful daughter of God. She has been an excellent example to our family and with love, we will do our best to carry on her legacy and hopefully touch at least a portion of the people she positively influenced in her life. The family would like to thank Aspen Senior Care and Valeo Home Health and Hospice for everything they have done to help care for our mom. Barbara is survived by her three children: Frank (Gloria) Hulme, Chandler, AZ; Robert Hulme, Provo, UT; Debbie (Brad) Farnsworth, Provo, UT; 19 grandchildren; 36 great-grandchildren. She is preceded in death by her husband, David K. Hulme; her son, Harvey R. Hulme; her parents and three brothers: Jay Sheldon Fitzgerald, Franklin Jack Fitzgerald, Harvey Richard Fitzgerald. Funeral services will be held Saturday, April 25, 2015 at 11:00 am in the Edgemont Ninth Ward Chapel, 4300 North Canyon Road, Provo. Friends may call Friday evening from 6-8 pm at the Berg Mortuary of Provo, 185 East Center Street or Saturday morning at the ward chapel, from 9:30 to 10:30 am prior to the services. Interment at the East Lawn Memorial Hills, Provo, UT. Condolences may be sent online at www.bergmortuary.com.

The family of Barbara Jean Fitzgerald Hulme created this Life Tributes page to make it easy to share your memories.

Send flowers to the Hulme family.