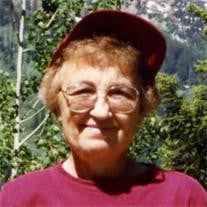 Barbara W. Stevens Nelson passed away peacefully at her home on June 7, 2010. She was 80 years old. She was born on April 30, 1930, in Salina, Utah to George Maynard and Eva Lorena Rust Wright. She was the fourth of five children. Her childhood was spent working on the farm and playing with her siblings and many cousins. When she reached her teenage years, her family moved to Provo, where she attended school and graduated from Provo High. Her pursuit of a Bachelor's Degree in Elementary Education included coursework at University of Utah and Brigham Young University. After a short courtship to Merlin Stevens, who had recently returned from an L.D.S. mission, they were married on August 12, 1952 in the Salt Lake Temple. Shortly after, they bought their first home. Barbara began teaching school shortly after her fourth son was born. She taught elementary and jr. high for many years while raising her young family. These were very busy and happy years for Barbara. Later, the family moved to Lancaster, California, where her youngest daughter was born. Her husband Merlin was killed in August of 1972 in a car accident. She moved her family back to Utah at that time. She was blessed to meet and marry Glen Nelson in December of 1978. They lived in Mapleton and then Springville, where she was residing at the time of her death. Before Barbara's health deteriorated, she was very active with her family. She loved the outdoors, golfing, sewing, reading, gardening, and even square dancing. She especially loved spending time with her family. She was very active in the LDS church, serving in many callings. Serving as a Relief Society teacher was particularly enjoyable to her. Barbara was an inspiration to her family and all who knew her. She is preceded in death by her parents, her first husband Merlin, all her siblings, one son, one grandson, and two granddaughters. Barbara is survived by her husband, Glen T. Nelson, her children, Dee M. Stevens (Kathy), Gary W. Stevens (Margaret), Denise Seastrand (Gary), McKay Stevens (Heidi), and Karen Cuzzens (Taylor). She leaves 25 grandchildren and 14 great-grandchildren. She is also survived by a kind and loving step-family: Fred Nelson (Rella), Ray Nelson (Pam), Ellen Huff (Steve), and Ann Jepson (Tony), 20 grandchildren and 41 great-grandchildren from the Nelson family. Funeral Services will be held at 12:00 noon, Saturday, June 12, 2010 at the Spring Creek 10th Ward Chapel, 672 North 250 West, Springville, Utah. Friends may call Friday, June 11, at Berg Mortuary of Provo, at 185 East Center from 6:00 to 8:00 pm, and at the church Saturday from 10:30 to 11:45 am prior to services. Interment, Provo City Cemetery. See maps below. Condolences may be sent to the family through www.bergmortuary.com or [email protected]

Barbara W. Stevens Nelson passed away peacefully at her home on June 7, 2010. She was 80 years old. She was born on April 30, 1930, in Salina, Utah to George Maynard and Eva Lorena Rust Wright. She was the fourth of five children. Her childhood... View Obituary & Service Information

The family of Barbara Stevens Nelson created this Life Tributes page to make it easy to share your memories.

Barbara W. Stevens Nelson passed away peacefully at her home...