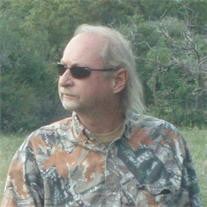 Benje (Ben) Howard Bowers, 53, of Springville, Utah passed away Friday, September 3, 2010, at his home surrounded by family members, after a long 2 year painful and courageous battle with Sarcoma cancer. Due to the cancer, Ben lost his left leg in February 2010 and passed away exactly seven months to the date of losing his leg. Ben was born on March 2, 1957 in Provo, Utah to Howard L and Joy Arrowsmith Bowers. Ben attended Wasatch Elementary School, Farrer Jr. High School and Provo High School. Ben worked for Flow-serve, formally Valtek Corp. in Springville, Utah for 25 years as a skilled Machinist. Ben was an accomplished outdoorsman. He loved to hunt and fish and went on several hunting trips with his best friend Jerry Earl. Ben looked forward to every hunt, including going out of state to do special hunts with Jerry, which they both were very successful. Ben's niece, Mykin and her better half, Travis Huff lived with Ben for the last 2 years and were his primary caregivers during his illness. Ben's niece Mykin was his only close family in the area, being both of Ben's brothers live out of state. The family would like to express their thanks to both of them for giving their extensive time and care to Ben during his rough battle with his illness and just being there for him to help him as he needed it. Ben is survived by two brothers; Michael A. Bowers of Washington D.C, and Jonathan T. (Doneil) Bowers of Kaaawa, Hawaii; Three nieces, Mykin (Travis Huff) Broadbent of Springville, Utah, Brooke Bowers of Ireland and Emma Bowers of Washington D.C.; nephew Kerry (Rheanna) Bowers of Nazareth, Pennsylvania; Mykin's daughter, Abbie Joy Broadbent; Kerry's daughters, Rowan and Anaka; many aunts, uncles and cousins, including his aunt Betty Arrowsmith of Provo, Utah. Ben is also survived by his best friend, Jerry Earl of Orem, Utah and his good friend, Travis Huff of Springville, Utah. Ben was preceded in death by both parents, Howard L. and Joy Arrowsmith Bowers; one brother, Thomas Charles Bowers; and several other family members and friends. The Family would also like to thank Utah Hospice Specialists for their care for Ben during his last 3 weeks and to the many friends that have come forward offering their help and assistance. Also we would like to thank the many doctors and specialists that helped care for Ben during his illness. Ben's wishes were to be cremated and buried at Provo City Cemetery, next to both his parents and his brother, with Graveside Services to be held at a later date with only close family and friends. Condolences may be sent to the family through www.bergmortuary.com or [email protected]

Benje (Ben) Howard Bowers, 53, of Springville, Utah passed away Friday, September 3, 2010, at his home surrounded by family members, after a long 2 year painful and courageous battle with Sarcoma cancer. Due to the cancer, Ben lost his left... View Obituary & Service Information

The family of Benje Bowers created this Life Tributes page to make it easy to share your memories.

Send flowers to the Bowers family.