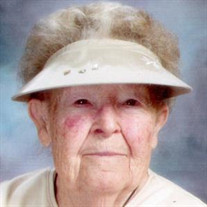 BEE REID MILLS WAS A LITTLE WOMAN WITH A BIG HEART. Berrel (Bee) Lavone Reid (Mills) was born in an old farmhouse in Olney Springs, Colorado. She was actually born on October 4, 1920, but the country doctor, who arrived the next day, listed... View Obituary & Service Information

The family of Berrel "Bee" Lavone Reid Mills created this Life Tributes page to make it easy to share your memories.

BEE REID MILLS WAS A LITTLE WOMAN WITH A BIG HEART.

Send flowers to the Mills family.