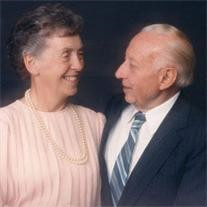 "Bertie" was born to Spencer Madsen (Poppy) and Ada Beulah Anderson (Mother Ada) on June 29, 1924 in Provo, Utah. She was the fourth of eight children - Duane (Ethelyn), Milo (Lila), Leone (Wayne Blair), Sheldon (Dorothy), LaVor (Faye), Donna (Art Paulson) and Ruth (Paul Reese) - growing up in Lake View by her mother's beautiful garden. She met the love of her life when Elman Lee Jackson taught her Sunday School class and they were married February 2, 1944, groundhog day, in the Salt Lake Temple. They were blessed with five children: James (Gay), Laurine (David) Mefford, Kelly (LaVonne), Merrill (Sheila), and Alan (Nyla), who gave her many happy memories, 23 grandchildren, 54 great grandchildren, and numerous gray hairs. She loved the birds that came to eat her bird seed, the beautiful flowering plants that adorned her home, and the myriad miniature knick knacks that inhabit the rock fireplace. She made it a point to remember every family birthday, anniversary, holiday, and a few things we hoped she would forget. Bertie went on to a happy reunion with Elman, her Savior, parents, Duane, Milo, Leone and LaVor, peacefully slipping through the veil on the morning of April 16, 2013 in her home. She will be remembered fondly by all who knew her. Funeral services will be held at 11:00 a.m., Tuesday, April 23, 2013 at the Edgemont 8th Ward Chapel, 3050 Mojave Lane, Provo, Utah. Friends may call at the Berg Mortuary of Provo, 185 East Center Street, on Monday evening from 6 until 8 and at the church on Tuesday from 9:30-10:45 a.m. prior to services. Interment, East Lawn Memorial Hills. Condolences or a favorite memory may be sent through her obituary at www.bergmortuary.com.

The family of Bertha Jackson created this Life Tributes page to make it easy to share your memories.