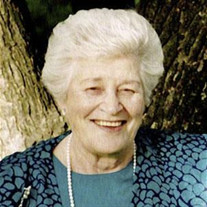 Beth Ford Shafer, age 92, of Provo, died March 17, 2015, at the Utah Valley Regional Medical Center. She was born July 26, 1922, in Provo, daughter of Melburn Allred Ford and Jane Sabey Ford. Beth is preceded in death by eight brothers, Emmett, Rodney, Mouris, Melburn, Max, Garth, Duane, and Howard and one sister, Ivadell. She is survived by her son, Craig Shafer, 68, her daughter, Judy Shafer, 64, and one brother, Hal, 80. She married William Lester Bill Shafer of Cardston, Alberta, in Boston, May 1944, before he shipped out for duty in the South Pacific serving as a Naval Lieutenant JG, Motor Torpedo Boats, during World War II. Bill died in Provo in 2002. After leaving Provo with only a suitcase in hand, Beth followed Bill to Harvard, Massachusetts, where he learned about naval communications. Beth then lived in Burlingame, California, while Bill was overseas with her sister Ivadell. After returning from the War, Bill worked for the Corps of Engineers and the Bureau of Land Management (BLM) in western states as a mining inspector. Beth worked as a telephone operator at Sears even while raising two children. They purchased a home in San Mateo, California, for $9,000 and resided there until 1955. After that, the family moved to the Washington, D.C. area where Bill worked again for the BLM and later for the House Committee on Interior and Insular Affairs as a mining and public lands consultant. Beth worked for the Montgomery County government in various roles and then as an Executive Secretary for Vitro Laboratories, in Silver Springs, Maryland for eighteen years. She returned to Provo in 2001. For her education she graduated from Provo High School in 1940 and attended the BYU from 1940-1941 where she met Bill. She later received an Associate of Arts Degree with Honors from Montgomery College in Maryland while still working full time. She was a voracious reader and especially enjoyed Louis L'amour westerns. She watched classic movies on TCMs and could name all the actors. Beth was active in the LDS Church her entire life. She was particularly interested in supporting her familys genealogy work on Ancestry. She was sealed to her husband in the Salt Lake Temple on May 2, 2003. Her domestic hobbies included sewing, knitting, cooking, canning and gardening. She was a collector of fine china and figurines. Beth especially liked traveling across the United States by automobile and visiting sites like national and state parks. She traveled with her husband to England, France, Germany, Holland, Switzerland, Italy, Spain and Portugal. She visited her daughter 17 times while Judy was working in the U.S. Virgin Islands where she was an avid snorkeler. The family wishes to thank the many private caregivers who looked after Beth during her last fourteen years in Utah. These include Rosa Zargosa, Naomi Gonzales, Yesenia Cassiano, Vania Morais, Sinai Folaumahiva and the staff of First Choice Home Health and Hospice, especially Garrett Thompson who kept her walking. Beth was a warm, gracious, always positive thinking and friendly woman. People from around the world still remember and remark about how she touched their lives and supported their life goals. She will be missed deeply. She was the type of wife and mother that so few have the honor to experience. The funeral will take place at Berg Mortuary in Provo at 11 AM on Saturday, March 21. A viewing will occur Friday, March 20, at Berg from 6-8 PM. The family requests that any donations for Beth be given to the local ASPCA.org.

The family of Beth Ford Shafer created this Life Tributes page to make it easy to share your memories.

Send flowers to the Shafer family.