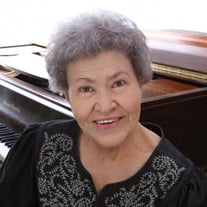 After many attempts knocking at her door, death did so once again during the early hours of Christmas Eve, and Betty finally answered. Betty Clark Francis was born October 12, 1937, in American Fork, Utah, to James Sylvester and Vera B. Clark. Her arrival came one day following her beloved mother’s birthday. Betty grew up in north Provo on family land settled by grandparents of the Walton/Brereton lineage. Her father, Sylvester, and grandfather, Earl Clark, built their home, which became a haven that she loved. Betty inherited her rich musical talent from both parents. At the age of three, she began piano lessons, and from that moment on, her hands became one with the piano keys. Evidence of her prodigy was immediate, and getting her to quit practicing long enough to eat was a challenge. School choirs were blessed by her piano and organ accompaniments, and Betty used her extraordinary talent to bless the lives of countless recipients throughout her life until diabetes later struck and claimed the use of her left arm. Throughout her life, her perfect pitch became both a blessing and a frustration. She would identify the chords and chromatics of each sound–explaining if they were too sharp or too flat to be honed for comfortable listening. If they were imperfect, she would grind her teeth and cringe until the noise subsided. Betty was educated at BY Elementary, Junior High, and High School–maintaining a perfect 4.0 all the way through her graduation in 1955 with high honors. Betty also attended Brigham Young University and graduated with honors in music theory and elementary education. For many years she would share her love of learning with her countless little people, all of whom she adored in the kindergarten classroom of Sage Creek Elementary School in Springville. In 1959, Betty was in the Miss Liberty Bell royalty and was asked to perform at the Fourth of July Panorama Stadium Show. During the finale number, she accidentally met Sam Francis, a gifted entertainer, and impressionist, while they were both on stage and Betty’s shoe got caught in the wooden bleacher. She literally fell into Sam’s arms. They began their courtship and were later sealed in the Salt Lake Temple of The Church of Jesus Christ of Latter-day Saints, June 15, 1962. Even after their marriage, the microphone and piano keys were not far from their reach. They continued traveling and entertaining wherever there was an opportunity. Sam and Betty built a lovely home in Springville in which they raised their two sons, Mike and Gary. Later, they moved to the original family homestead near LaVell Edward’s Stadium, where she spent the final 14 years of her life. Betty served faithfully in her church and civic duties. She was a remarkable cook and prepared countless meals for family and friends–especially throughout the Holiday Season– her favorite time of year. How fitting it is that she passed on the eve before the celebrated birth of the One she now faces. Her gift to us this year is her final testimony of Him and His teachings of the family–its importance and its eternal and forgiving nature. Betty is survived by her husband Samuel E. Francis, Provo; sons Michael E. (Fay) Francis, American Fork; Gary R. Francis, Provo; two brothers: Robert E. (LuWana) Clark, Orem; and Ronald J. (Kathleen) Clark, Orem; four grandchildren; two great-grandchildren; and many nephews and nieces. Betty’s passage is preceded by her parents; grandparents: Elmo and Aurora Brereton and Earl and Anne Clark; and a large ancestry of which she studied and cradled in her heart–all of whom now hold her in their arms. Funeral services will be held at 11:00 a.m., Wednesday, December 30, 2020 at the Berg Drawing Room Chapel, 185 East Center Street, Provo, Utah. Close friends to Betty and family members are invited to a viewing from 9:30-10:30 a.m. prior to services. Because there are capacity restrictions placed on us during the COVID virus, Betty’s services will be recorded and available for all to view on the mortuary website following her burial in the Provo City Cemetery. Facemasks are required and appreciated. Condolences may also be expressed at www.bergmortuary.com.

After many attempts knocking at her door, death did so once again during the early hours of Christmas Eve, and Betty finally answered. Betty Clark Francis was born October 12, 1937, in American Fork, Utah, to James Sylvester and Vera B. Clark.... View Obituary & Service Information

The family of Betty Clark Francis created this Life Tributes page to make it easy to share your memories.

After many attempts knocking at her door, death did so once again...

Send flowers to the Francis family.