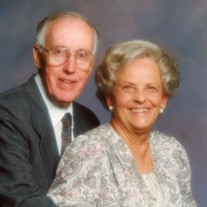 Betty Lucile Brown Garrett, our dear mother, grandmother and great-grandmother was called home to her Father in Heaven on Thursday, April 23, 2015 at the UVRMC, surrounded by her family. She was 91. She was born October 26, 1923 in Provo, Utah to Cecil Robert Brown and Annie Lucile Goddard Brown, the second of three children. Her growing up years in Provo were happy years with loving, kind parents, brother and sister; many wonderful family members and lots of special friends. She received her education in the Provo City Schools and graduated from Provo High School. She married Jay Oscar Garrett May 29, 1943 in Provo, Utah. Their marriage was later solemnized October 26, 1949 in the Salt Lake Temple. Her greatest loves were her family and her membership in The Church of Jesus Christ of Latter-day Saints. She served faithfully in various church callings such as: Relief Society Counselor, Teacher in the Young Women, Cub Scout Den Leader with her boys and various callings in the Primary. Her most loved calling was teacher of the Sunbeam Class. Later in life, she enjoyed serving with her husband as LDS Service Missionaries working with building inspections in Utah, Idaho and Wyoming; a service mission for the LDS Employment Center and serving for 16 years as Orientation Missionaries at the Provo Missionary Training Center. Over the years, Betty became an avid scrap booker, completing 52 books of family photos and memorabilia for maternal and paternal parents, sons, daughter-in-laws, grandchildren and great-grandchildren. These pictures, taken over the years, have preserved memories that may have been otherwise forgotten. She loved watching and attending sport activities, especially if it involved a child, grandchild or BYU. Betty was always ready and willing to lend a helping hand. You couldn’t talk to her without knowing how “special” she thinks you are. She has shown great patience and courage in her final years. Her life and example left a legacy of love and laughter, unselfishness, kind words, forgiveness and family unity. Her descendants are forever changed for good because of her influence. Betty was preceded in death by her husband, Jay Oscar Garrett; parents; brother, Cecil Goddard Brown; sister, Gloria Luella Brown Williamson and grandson, Lee Alan Garrett. She is survived by 3 sons: Jay Alan (Sharon) Garrett of Lehi, Paul Joseph (Cheri) Garrett of Orem, R. Michael (Christine) Garrett of Orem; 16 grandchildren; 41 great-grandchildren and 2 great-great-grandchildren. Funeral services will be held at 2:00 p.m., Saturday, May 2, 2015 at the Edgemont 4th Ward Chapel, 4056 North 650 East, Provo, Utah. Friends may call from 12:30-1:45 p.m. prior to services. Interment, Provo City Cemetery. Condolences may be sent online at www.bergmortuary.com.

Betty Lucile Brown Garrett, our dear mother, grandmother and great-grandmother was called home to her Father in Heaven on Thursday, April 23, 2015 at the UVRMC, surrounded by her family. She was 91. She was born October 26, 1923 in Provo, Utah... View Obituary & Service Information

The family of Betty Lucile Brown Garrett created this Life Tributes page to make it easy to share your memories.