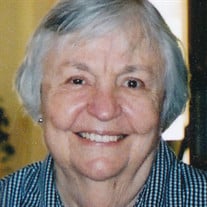 Beula Bell Hinckley, beloved wife, mother, grandmother, and friend, died peacefully on July 30, 2014 at the age of 88 after a long illness. Beula Bell was born July 10, 1926 in Preston, Idaho, the oldest child of Asael Enos and Cassie Stephenson Bell. The first two years of her life were spent in a log cabin near McCammon, Idaho where her parents taught school. Beula graduated from Preston High School in 1944 and was the only one of her class who chose to attend Brigham Young University that year. She graduated from BYU in 1948 with a major in Sociology and a minor in English. In September 1947, Beula married Edwin C. Hinckley in the Salt Lake LDS Temple. After her graduation, Ed and Beula moved to Oregon where Ed attended Oregon State University and taught high school in Eugene for ten years. Their three children, Ann, Scott, and Craig were born in Oregon. After living briefly in Wisconsin and Colorado, the family moved back to Provo in 1963 when Ed accepted a job teaching Industrial Education at BYU. Not long after that, Beula returned to school and received her Masters of Social Work degree from the University of Utah in 1968. She worked in several different social work positions in her career, most notably as Director of the Forensic Unit at Utah State Hospital. Beula and Ed loved to travel. After spending two working years in Ethiopia, they traveled throughout the world visiting all continents except Antarctica. They were confirmed birders and loved to travel to prime bird watching sites, particularly in Australia and South America. Beula loved to read, sew, and cook. She loved to learn and excelled in everything she attempted. She and Ed were warm and welcoming to family and visitors and had a permanent open door policy for everyone at both their homes in Provo. Beula was a committed member of the LDS church and valued the blessings she received from her service there in many positions over many years. She was an empathetic and funny mother who supported her children and grandchildren in whatever choices they made. She loved her family unconditionally. We are fortunate to have had her as a mother and grandmother. Beula was preceded in death by her husband, Edwin C. Hinckley, Jr. She is survived by her three children, Ann (Patrick) Costello, E. Scott (Mikelene), and Craig A. (Jan); eight grandchildren, Amanda (Curtis) Neill, Sean, Robb (Lindsey), Jeffrey (Alyssa), Caitlin (Nate) Robinson, Dana (Dale) Eggett, Neil and Whitney Hinckley; and seven great-grandchildren, Owen, Henry, Ryan Jo, Connor, Kitty, Betsy, and Samuel. Beula is also survived by her brother Evan (Lois) Bell, Peterborough, Ontario and Max (Jean) Bell, Pacific Grove, California, as well as several much loved nieces and nephews. Funeral services will be held at 10:30 a.m., Saturday, August 9, 2014, at the Pleasant View 3rd Ward Chapel, 650 East Stadium Avenue, Provo, Utah. Friends may call at the church from 9:30–10:15 a.m. prior to services. Burial will be in the Provo City Cemetery. Condolences to the family may be emailed to [email protected]

The family of Beula Bell Hinckley created this Life Tributes page to make it easy to share your memories.

Send flowers to the Hinckley family.