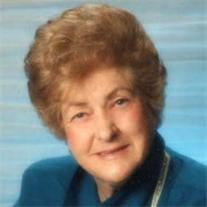 Beulah Ricks Blaser 1918 ~ 2012 Beulah Ricks Blaser passed away peacefully at her home February 11, 2012 after having recently celebrated her 94th birthday. Grandma B, as she was affectionately known, lived a very full and productive life. She was born January 28, 1918 in Rexburg, Idaho to Peter Jeppesen Ricks and Emily Elizabeth Arnold Ricks. Her early life was spent on the family farm. Grandma B loved and found beauty in all of nature. She is legendary for her ability to grow anything of beauty and goodness. As a child she enjoyed riding her horse Whitey and loved to fly fish with her father in Yellowstone Park. Her formal education began at the tiny Cedar Point School. She attended Madison High School; and received an elementary teaching certificate and Associate's degree from Ricks College. Beulah served an LDS mission in the Northern States, spending time in Dayton, Ohio, and also Detroit and Flint, Michigan. After returning home, she graduated from BYU with a Bachelor's degree in nutrition and home economics. She also did some post graduate work at the University of Utah. While at BYU, she enthusiastically took to flying airplanes as a student pilot. After her formal schooling, and some faculty time at BYU, Beulah moved to Philadelphia to work for J. Willard Marriot. She was asked to return to Ricks College in 1945 to head the Home Economics program, and to initiate the women's Physical Education program. While teaching, she met and later married Gwyllum G. Blaser on December 20, 1946 in the Idaho Falls Temple. They moved to Salt Lake City while Gwyllum attended medical school then to Preston Idaho, then back to Salt Lake City for a time and then settled in Provo, where Beulah has resided since 1968. Beulah was always active in the LDS church, having many opportunities to serve in many ward, stake and temple callings over the years. She especially enjoyed many years of part time missionary service at the Missionary Training Center. She maintained her spunk and enthusiasm for life to the end. She found joy in beautiful music, and above all else, Beulah loved her family. She is preceded in death by her husband Gwyllum in 1979, and is survived by her six children: Rexine; Gwyllum and wife Beth; Marian; Sherman and wife Ellen; Jared and wife Rebecca; Deon and husband David Sagers; 15 grandchildren; 16 great-grandchildren; and many dear loved ones, friends, and extended family. Funeral Services will be held on Friday, February 17, 2012 at 11:00 a.m. in the Pleasant View 3rd Ward Chapel, 650 Stadium Avenue, Provo. Friends may call at Berg Mortuary, 185 East Center Street, Provo on Thursday evening from 6 until 8 and at the church on Friday morning from 9:30 until 10:45. Family and friends may gather on Saturday, February 18, 2012 from 11:00 a.m.-12:00 noon in the Archer Sunnydale Ward Chapel, 201 West 8000 South, Rexburg. Interment services will be at 12:00 noon, followed by the dedication of the grave at the Sutton Cemetery. Condolences may be sent through Beulah's obituary at www.bergmortuary.com.

Beulah Ricks Blaser 1918 ~ 2012 Beulah Ricks Blaser passed away peacefully at her home February 11, 2012 after having recently celebrated her 94th birthday. Grandma B, as she was affectionately known, lived a very full and productive life. She... View Obituary & Service Information

The family of Beulah Blaser created this Life Tributes page to make it easy to share your memories.

Send flowers to the Blaser family.