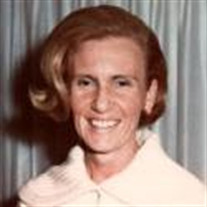 Beverly L. Crawford peacefully passed away April 16, 2015 at the home of her daughter, Ann Macdonald in Provo, Utah. She was born January 23, 1930 in Fountain Green, Utah to Sadie and Abram Livingston. Beverly had two older siblings, Lewis and Barbara, and one younger sister June. Her family stayed in Fountain Green until Beverly was seven and then moved to Craig, Colorado for the summer before moving to Logan, Utah in the fall of 1937. They had a nice home in Logan by the college. Bev’s family rented rooms to college students and Bev’s father would travel to work in Colorado. When Beverly was 13 her family moved to Craig, Colorado. Bev attended high school in Craig, was President of the Junior class, and she also played clarinet in the band. When she was 16 she worked after school and on weekends for the telephone company as an Operator. After graduating from high school, she continued to work there and was promoted to Assistant Evening Chief Operator. In November 1948 she met Jim Crawford. They dated until Christmas when they became engaged, and on February 1, 1949 they were married. In 1952 a daughter, Ann was born to them followed in 1959 by another daughter, Sue. In 1961 they sold their home in Craig and moved to Provo, Utah where they built a new home and Jim continued his college education. In 1964 Jim was offered a job in Phoenix, Arizona. The family bought a home in Scottsdale and remained there until 1979 when they moved back to Provo, Utah. Beverly had many enjoyable working experiences throughout her life. She worked in department stores, gift shops, and for many years in the ZCMI bridal registry. She enjoyed working with the young brides and also helping with the yearly tabletop decorating competitions. Beverly is survived by her daughters, Ann Macdonald and Sue Poff. She has many grandchildren and great-grandchildren that she loves very much. The family would like to thank the many people who have helped and served Bev in her illness. Graveside services will be held at 2:00 p.m., Monday, April 20, 2015 at the Manti City Cemetery, 500 North Main Street, Manti, Utah. Condolences may be sent online at www.bergmortuary.com.

Beverly L. Crawford peacefully passed away April 16, 2015 at the home of her daughter, Ann Macdonald in Provo, Utah. She was born January 23, 1930 in Fountain Green, Utah to Sadie and Abram Livingston. Beverly had two older siblings, Lewis and... View Obituary & Service Information

The family of Beverly L. Crawford created this Life Tributes page to make it easy to share your memories.

Send flowers to the Crawford family.