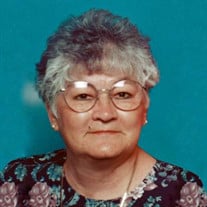 Beverly Jean Castila Leavitt, 84, passed away on Monday, June 22, 2020. Beverly is preceded in death by her husband, Von Leavitt; parents, Luella and Andy Janoras; brother, Rex Castila; sister, Pearl de Castro, and three great-grandchildren. She is survived by her sister, Norma Lowe of Pensacola, Florida and all six of her children: Aleta (Scott) Goodwin, Aundre (Marie) Leavitt, Avear Leavitt, Adrein (Lorie) Leavitt, Andrew (Kristin) Leavitt, and Alma (Christie) Leavitt; 25 grandchildren and 40 great-grandchildren (with one on the way). Beverly was born to Luella and Joaquin Castila on May 9, 1936 in Bakersfield, California. She was later adopted by Andy Janoras. She grew up in Salem, Utah and after graduating high school married her high school sweetheart, Von Leavitt, on December 24, 1954. Their marriage was later solemnized in the Arizona Temple. She was a military wife and lived all over the United States for over two decades before finally moving to Italy near the end of her husband’s career. She accompanied her husband from one end of the country to the other. From Tucson, Arizona to Minot AFB, North Dakota, from Beale AFB, California to Orlando, Florida. Mom bloomed where she was planted. She was also active as the head score keeper in Italy for the baseball league. She served in many capacities in The Church of Jesus Christ of Latter-day Saints, which included various callings in the Primary (mostly in the Cub Scout Program); various callings in the Relief Society, including District Relief Society President while living in Aviano, Italy for three years. She and dad served as ordinance workers in the Provo Temple. One of her six children, Andrew, served a full-time mission to the California Los Angeles Mission. Beverly had a great love for family and the gospel of Jesus Christ. Her greatest accomplishment was raising six children, often by herself. While dad was away fighting, first in the Korean War, and then serving two tours of duties in the Viet Nam War, mom learned to be fiercely independent. Summing up her accomplishments mom said, “All I ever wanted was to be a wife and mother.” After raising her family Beverly returned to the classroom to continue her education at Brigham Young University majoring in psychology. She was heavily involved in the Order of the Eastern Star for many years. Beverly loved to create things. She was an excellent seamstress and could sew anything. She could knit and crochet anything and would often crochet bandages for lepers in the Hawaiian colonies. She also enjoyed painting and was a voracious reader. Her service and compassion to all those around her has influenced many, especially her grandchildren, to follow in her footsteps. She will continue to inspire all her posterity for generations to come. Private family funeral services will be held Saturday, June 27, 2020. Condolences may be expressed at www.bergmortuary.com.

The family of Beverly Jean Castila Leavitt created this Life Tributes page to make it easy to share your memories.

Send flowers to the Leavitt family.