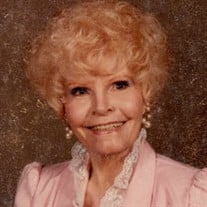 On July 6, 2014 Beverly Marie Keate Burrows passed peacefully into our Heavenly Fathers arms, and joyfully is reunited with her eternal companion and husband of 73 years. Beverly was born on October 5, 1921 to Clifford & Marie Keate, the oldest of three children. Beverly graduated from East High School in Salt Lake City, where she met the love of her life, Duane Kenneth Burrows. They were married on March 29, 1941, and later sealed together for eternity in the Salt Lake Temple. They had three children who were the joy of their lives. She was a member of the LDS church where she served in many callings, including young women’s president and in the relief society presidency. Beverly worked at Taylors, JC Penny’s and ZCMI department stores; she also helped Duane run Duane’s Office Equipment for 30 years. Beverly loved to dance. She owned and operated the Ballerina Shop and Dance Studio in downtown Provo. Beverly was a beautiful woman. She had modeled many times and was chosen as the Hill Air Force Base “Pin up Girl” during WWII. Duane and Beverly were dance directors and loved to travel the world. Beverly was preceded in death by her husband, Duane Burrows, and survived by her three children: Michael (Claudia) Burrows, Richard (Maureen) Burrows and Beckie (Mike) Herring; 17 grandchildren; 45 great-grandchildren; 18 great-great-grandchildren; and sister, Marie Keate Chase. Funeral services will be held at 11:00 a.m., Saturday, July 12, 2014 at the Marrott Meadows LDS Chapel, 102 North 2400 West, Provo, Utah 84601. Friends may call at the Berg Mortuary of Provo, 185 East Center Street, Friday, July 11, from 6:30-8:30 p.m. and at the church Saturday from 10-10:45 a.m. prior to services. Interment, Provo City Cemetery. Condolences may be sent to the family online at www.bergmortuary.com.

On July 6, 2014 Beverly Marie Keate Burrows passed peacefully into our Heavenly Fathers arms, and joyfully is reunited with her eternal companion and husband of 73 years. Beverly was born on October 5, 1921 to Clifford & Marie Keate, the oldest... View Obituary & Service Information

The family of Beverly Marie Keate Burrows created this Life Tributes page to make it easy to share your memories.

Send flowers to the Burrows family.