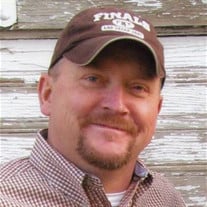 Blake J Allred, age 51, passed away at his home in Provo, UT on Jan. 17, 2015. He was born December 25, 1963 to Jennis Blaine and Dellene Anderson Allred in Gunnison, UT. He grew up in Manti, UT, working on his family farm as well as others where he developed his love for agriculture and animals. A graduate of Manti High School, he was actively engaged in a number of activities such as being the starting pitcher for the high school baseball team, football and also the president of FFA. He married Sylvia Green shortly after high school. Together they had 3 wonderful boys, BJ, Jordan and Bridger. Blake and Sylvia lived in Orem, UT for a number of years until they moved to Fountain Green, UT in 1996. Blake was a very hard worker and it was important for him to provide for his family. He was employed for many years at Powder River, Steve Regan and briefly at Tarter Gate where he made wonderful, lifelong friends. In 1999, Blake and Sylvia divorced and Blake moved up north. In 2010, Blake married Lisa Andersen and gained a daughter, Madison L. Gabbitas. They resided in Provo until his death. Blake was most happy in the mountains, hunting, fishing and camping with his family and friends. His children and especially his grandchildren made him very proud. Rarely seen without a smile, Blake was a jokester and loved to tease but would go out of his way to help anyone in need. Blake is survived by his wife, Lisa; children: BJ (Kaiya) and their children, Xander and Adrian; Jordan (Aleena) and their daughter, Aurora, Bridger and Madison; his mother, Dellene; brothers, Kenny and Chad; sisters, Jenilee and Janell; and many nieces and nephews. He was preceded in death by his father, Jennis Blaine Allred. Funeral services will be held on Saturday, January 24, 2015 at 11:00 a.m. at the Lakeside 10th Ward Chapel, 2225 West 620 North, Provo, Utah. Friends may call at the Berg Mortuary of Provo, 185 East Center Street, Friday, January 23 from 6-8:00 p.m. and at the church Saturday from 10-10:45 a.m. prior to services. Interment will be at 2:30 p.m. at the Manti City Cemetery. Condolences may be sent online at www.bergmortuary.com.

Blake J Allred, age 51, passed away at his home in Provo, UT on Jan. 17, 2015. He was born December 25, 1963 to Jennis Blaine and Dellene Anderson Allred in Gunnison, UT. He grew up in Manti, UT, working on his family farm as well as others... View Obituary & Service Information

The family of Blake J Allred created this Life Tributes page to make it easy to share your memories.

Send flowers to the Allred family.