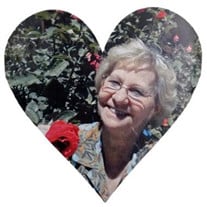 Blanche Irene Shell Heath Sampson passed away peacefully in her sleep on April 2, 2021. She was 85 years old. She was born November 11, 1935, to Carl and Florence Shell at Payson Hospital in Payson, Utah. Blanche grew up and attended school in Payson, except for one year in high school when she and her family lived in Cuba due to her father’s employment. Blanche met LeRoy Heath shortly after LeRoy was honorably discharged from the U.S. Army after serving in the Korean conflict. They fell in love and were married on September 10, 1954, in Ely, Nevada. They were later sealed in the Provo Utah Temple. They moved back to Payson where they raised their three children. Blanche and LeRoy had a son named Doyle, and two years later had twins named Brent and Brenda. Blanche liked to keep busy and held many different jobs over the years. She was a school lunch lady, seamstress, an ice cream store manager at the mall, a cashier at Safeway, and a hostess at Village Inn. She was talented with crafts, sewing, cooking, gardening, and making her famous apple sauce cake. Blanche and LeRoy loved to travel and explore new places. They also enjoyed square dancing together. Blanche had amazing sewing skills and made beautiful matching square dancing outfits. She could make any outfit and was an expert at clothing alterations without using a pattern. She supported LeRoy in his jobs in different states and helped him earn a bachelor’s degree in geology from Brigham Young University. LeRoy was employed as a geologist in Las Vegas, Nevada, when he unexpectedly passed away on November 21, 1994. Shortly thereafter, Blanche moved to Orem, Utah, to be closer to family and adopted a small Shih Tzu dog that she loved. She loved visits from her children and grandchildren. Blanche was working at Village Inn in Orem, Utah, when she met William “Sam” Sampson. They dated for a few years and were married on November 7, 2001, at Lake Tahoe, Nevada. She sold her home in Orem and moved to Sam’s home in Lindon, Utah. Blanche and Sam traveled to multiple states and earned various square dancing awards. They loved being “snowbirds” living in Yuma, Arizona during the winter months and living in either Lindon, Utah or traveling to various northwestern states and Canada in the summer. Sam died January 2, 2015, in Yuma, Arizona. Blanche moved back to Lindon, Utah, where she resided until her health required moving to Lake Ridge Senior Living in Orem, Utah, in 2018. She received excellent love and care during her final years. Her home and visiting teachers continued to visit and care for her. Blanche was loved by all who knew her. Many referred to her as “the sweet lady.” She frequently shared expressions of gratitude to everyone that helped her. She will be truly missed by her family and friends. Blanche was a member of The Church of Jesus Christ of Latter-day Saints. Blanche was preceded in death by her parents, Carl and Florence Shell; brother, Allen Shell; sister, Dorothy York; daughter, Brenda Lundell; and grandchildren, Trent Lundell and Justin Lundell. She is survived by sons, Doyle (Jeanne) Heath of Kennewick, Washington and Brent (Kim) Heath of Spokane Valley, Washington; grandchildren, Jason (Jan) Lundell of Spring, Texas; Darryl (Gerry) Heath of Coeur d’Alene, Idaho; Kevin (Elisha) Heath of Spokane Valley, Washington; Courtney Heath of Cheney, Washington; Robert (Rachel) Heath of Orem, Utah; and James (Cara) Heath of Spokane Valley, Washington; and many great-grandchildren. Funeral services will be held at 11:00 a.m., Friday, April 9, 2021 at the Berg Orem Chapel, 500 North State Street, Orem, Utah. Friends and family may call from 9:30-10:45 a.m. prior to services. Burial will follow at Payson City Cemetery where she will be interred next to her husband and eternal companion, LeRoy A Heath. Condolences may be expressed at www.bergmortuary.com.

Blanche Irene Shell Heath Sampson passed away peacefully in her sleep on April 2, 2021. She was 85 years old. She was born November 11, 1935, to Carl and Florence Shell at Payson Hospital in Payson, Utah. Blanche grew up and attended school... View Obituary & Service Information

The family of Blanche Irene Shell Heath Sampson created this Life Tributes page to make it easy to share your memories.

Blanche Irene Shell Heath Sampson passed away peacefully in her...

Send flowers to the Sampson family.