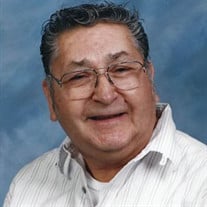 A bright light of laughter was gently dimmed as Bonifacio (Bonnie) Jake Medina, passed away Thursday, September 4, 2014. Bonnie began his life in Del Norte, Colorado, on May 14, 1939, to Salvador and Augustina Arellano Medina. On June 18, 1962, he married Elsie Cordova, his true friend and caring companion, in the St. Francis Jerome Catholic Church in Center, Colorado. Together they created a life filled with laughter and a family of three children, eight grandchildren and three great-grandchildren. Throughout his life, Bonnie shared his gift of laughter. He was well known for his teasing and joking ways that would most definitely make you laugh. If you were in his presence and mad, you would not stay that way for long for Bonnie would make it a point to get you to laugh until you forgot what you were mad at. Bonnie especially liked to share his gift of laughter with his children, grand and great-grandchildren. He played with them, sang to them, bounced them on his knee, and, definitely, made them all laugh. As much as he made them laugh, he also showed them how much he cared with his infectious smile and kind heart. For 18 years, Bonnie worked at the American Fork Development Center. He was a dedicated worker and bonded easily with the people in residence because of his laughter and caring manner. As much as he teased those he bonded with, they would tease him back, especially when he wore his rainbow suspenders. A game of “flick the suspenders and sneak away” would quickly come about and end with everyone laughing. A joy in Bonnie’s life was his love of dogs. Whether the dogs belonged to him, a family member or a neighbor, there was always one or more on his lap or by his side. He had a special connection with dogs and loved to have them around. Bonnie also loved to work on things, even if they were not broken. He had a passion for the Utah Jazz, Denver Broncos and hot spicy food. Because of his laughable and caring personality, he made friends easily with neighbors and visitors while he took care of the community swimming pool. May all those that knew Bonnie, remember to celebrate the laughter of his life as it was well lived. Laughter is beautiful! He is survived by his wife; three children: Rick (Carla), Layton, Utah, Patricia ‘Trish’ (Scott) Morris, Peoria, Arizona, and Phyllis (Troy), Provo, Utah; eight grandchildren: Devin, Danielle (Jason) and Brooke Medina, Dexter and Miranda Morris, Brock, Megan and Jordan Barr; three great-grandchildren, Ryker, McKay and Abigail; and a brother, Joe Medina, Golden, Colorado. A Funeral Mass will be held at 11:00 a.m., Monday, September 8, 2014 at the St. Francis of Assisi Catholic Church, 65 East 500 North, Orem, Utah. Friends may call at the Berg Mortuary of Provo, 185 East Center Street, Sunday, September 7, from 6-8:00 p.m. and at the church Monday from 10-11:00 a.m. prior to services. Interment will be in the Provo City Cemetery. Condolences may be sent online at www.bergmortuary.com.

A bright light of laughter was gently dimmed as Bonifacio (Bonnie) Jake Medina, passed away Thursday, September 4, 2014. Bonnie began his life in Del Norte, Colorado, on May 14, 1939, to Salvador and Augustina Arellano Medina. On June 18, 1962,... View Obituary & Service Information

The family of Bonifacio (Bonnie) Jake Medina created this Life Tributes page to make it easy to share your memories.

A bright light of laughter was gently dimmed as Bonifacio (Bonnie)...

Send flowers to the Medina family.