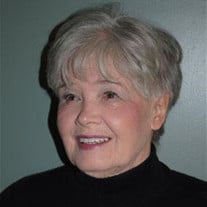 There is no encapsulating the life of Bonnie Rae Anderson. She was born to Benjamin and Nina Hull, the first daughter of six girls. At the age of 18 months, her mother found her on the front porch with a hammer in hand. She had nailed nails... View Obituary & Service Information

The family of Bonnie Rae Hull King Anderson created this Life Tributes page to make it easy to share your memories.

There is no encapsulating the life of Bonnie Rae Anderson. She...