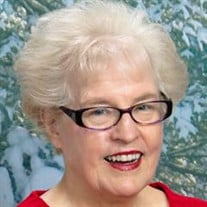 Bonnie Bennett, 81, of Provo, Utah, passed away, January 29, 2019, at Utah Valley Regional Medical Center in Provo, Utah. Bonnie was born to Hertha Wugk and Dean Larson on February 5, 1937 in Sterling, Idaho. She graduated from Blackfoot High School in 1955, and received a Bachelor of Science degree in Nursing from Brigham Young University in 1961. She then pursued further education at the University of Utah, and worked at LDS Hospital in Salt Lake City. Seeking adventure, she flew to Germany in 1965, where she met the love of her life, Thomas H. Bennett−an E4 in the U.S. Army−in Heidelberg at the “Burning of the Castle.” They were married in Basel, Switzerland in 1967 and following Tom’s tour of duty, they moved to Idaho and eventually settled in Provo, Utah. Bonnie and Tom brought three incredible children into the world: Thomas William Bennett, Michael Otis Bennett, and Jennie Eileen (Bennett) Briggs. Bonnie worked as a registered nurse for over 35 years at American Fork Hospital and Utah Valley Regional Medical Center. She was an attentive and caring nurse; her patients loved her willingness to lend an ear or shoulder to cry on, and the doctors trusted her instinct and wisdom. Bonnie was a loving mother who worked tremendously hard to help support her family. Despite working long hours, she always made time for her family. Time with mom was greatly cherished. Bonnie never stopped learning. She had a passion for education and would continually read and study to keep up to date on the latest in her field and issues in the world. She was very politically active and inspired many to get involved with campaigning. She was a member of the Democratic Women of Utah County and was honored with “Woman of the Year” in 2016. Bonnie was preceded in death by her parents and many siblings; most recently, Betty Fivecoat and Carl Larson. She was also preceded in death by her grandson, Austin Michael Bennett. Bonnie is survived by her loving husband, Thomas H. Bennett and their children and spouses: Thomas and Tess Bennett, Michael and Jean Bennett, and Jennie and Sam Briggs She is also survived by eight grandchildren and two great-grandchildren. We would like to thank the incredible staff at Utah Valley Regional Medical Center for taking such good care of one of their own as she passed into the next life. Your kindness helped our family during one of the worst times in our lives. Funeral services will be held at 11:00 a.m., Monday, February 4, 2019 at the Berg Drawing Room Chapel, 185 East Center Street, Provo, Utah. Friends may call at the mortuary Sunday, February 3 from 6-8:00 p.m. and Monday from 9:30-10:50 a.m. prior to services. Interment, Provo City Cemetery. Condolences may be expressed at www.bergmortuary.com.

The family of Bonnie Bennett created this Life Tributes page to make it easy to share your memories.

Send flowers to the Bennett family.