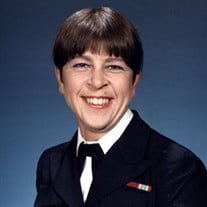 Bonnie Lee Berhow passed away on February 27, 2015 at the age of 59. Bonnie was born on January 31, 1956 to Richard David and Loretta Marion (nee Mueller) Holscher in Rome, New York. She is the third of 6 children. Bonnie lived in Payson, Utah for the past 8 years with her husband Russ. Her first husband, Eric Villand predeceased her after 8 years of marriage. Bonnie was married to Russell Edward Berhow on November 4, 1995 in his hometown of Mayfield, Kentucky. Bonnie and Russ met while serving in the Navy. Bonnie served in the US Navy as a Boatswain Mate 1st Class (E-6). She served in Operation Desert Storm and received the Kuwait Liberation Medal from Kuwait and Saudi Arabia. Bonnie also received the Southwest Asia Service Medal with 2 Stars. She retired from the Navy in October 1998. Her passion was always working with animals which grew into a farming life. She cared for her goats, cows, dogs, cats and any other animal that needed care. She also enjoyed crafting, sewing and crocheting. Of the many items Bonnie crocheted, she made small blankets which were donated to the South Utah Valley Animal Shelter. She was an accomplished stained glass artist designing pieces using copper foil and leaded glass. Her stained glass is prominently displayed in church windows, businesses and homes. Her creative interests were mixed with gardening and caring for her home. Bonnie is survived by her husband, Russell of Payson, Utah; sisters, Eileen Holscher of Las Vegas, Nevada and Peggy (Bill) Killewald of Tonawanda, New York; brothers, Bruce Holscher of Buffalo, New York, Daniel (Sharon) Holscher of Medford, Oregon, and Rick Holscher of Boise, Idaho; 4 nephews and 3 nieces. In lieu of flowers, Bonnie’s family requests donations to be sent to the South Utah Valley Animal Shelter. Memorial services will be held at 2:00 p.m., Saturday, March 7, 2015 at the Payson West Stake Center, 780 West 500 South, Payson, Utah.

Bonnie Lee Berhow passed away on February 27, 2015 at the age of 59. Bonnie was born on January 31, 1956 to Richard David and Loretta Marion (nee Mueller) Holscher in Rome, New York. She is the third of 6 children. Bonnie lived in Payson,... View Obituary & Service Information

The family of Bonnie Lee Berhow created this Life Tributes page to make it easy to share your memories.

Send flowers to the Berhow family.