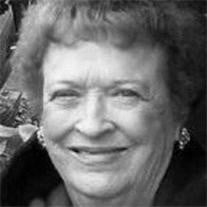 Bonnie Hansen Dyer passed away peacefully in her sleep on March 30, 2012. Bonnie was born on December 3, 1928 in Lewiston Utah to Wyroa and Clarence Hansen. Her father and brother, Elwood, passed away when she was young; as a result, she developed a deep, lifelong bond with her sisters Maxine and Meredith. She grew up in Spring City, Utah where her mother Wyroa was her first grade teacher. As a youngster, Bonnie developed a love of learning that stayed with her throughout her life. She loved books, traveling, and vacations with her family. Bonnie attended BYU where she graduated with her Bachelor's degree in Home Economics and, subsequently, became a legendary cook. Our family couldn't get enough of her cooking—literally, because she was constantly sending the homemade rolls, bread, pies, and toffee to neighbors. She met and married Bill Dyer while a student at BYU and they had five children -- Gibb, Michael, Lisa, Jeff, and David -- who became the focus of her life. Bonnie was a devoted mother to her five children—and later to her 19 grandchildren and 9 great grandchildren. Her life was centered on making them happy. Bonnie had a rare gift—she had a tremendous, almost unbelievable capacity to love others, and she never said an unkind word about anyone. Bonnie's life was a life of service—to her children, her neighbors, and her church. She was selfless almost to a fault, always putting others' needs before her own. Whether serving as the Relief Society or Primary President, or the greeter at relief society, she magnified every calling and had a deep commitment to the gospel of Jesus Christ. She and her husband Bill served a public affairs mission for the LDS Church helping people learn to read, feeding the homeless, and teaching church members how to reach out to the broader community. Bonnie was always positive and optimistic, despite dealing with major health challenges and the loss of her father and brother early in life. Through her health challenges she developed a deep empathy and compassion for others. In fact, her favorite church calling was that of Compassionate Service Leader. She is survived by her children Gibb (Theresa) Dyer, Michael (Carol) Dyer, Lisa (Joe) Hanson, Jeff (Ronalee ) Dyer, and David (Lori) Dyer, 19 grandchildren, and 9 great grandchildren and sister Maxine Hatch. She is preceded in death by her husband Bill, sister Meredith, brother Elwood, and grandson Kimball. Family and friends are invited to a viewing on Wednesday evening at Berg Mortuary from 6-8 pm at 185 E. Center Street, Provo, or Thursday from 9:30-10:30 am prior to the funeral. Funeral services will be held on Thursday April 5th at 11 am at the Edgemont 8th ward chapel at 3050 N. Mojave Ln., Provo. In lieu flowers please make donations to "William G. and Bonnie Dyer Endowment" sent to Jeff Dyer at BYU, 590 Tanner Building, Provo Utah 84602. Condolences may be sent through her obituary at www.bergmortuary.com/obituaries.

Bonnie Hansen Dyer passed away peacefully in her sleep on March 30, 2012. Bonnie was born on December 3, 1928 in Lewiston Utah to Wyroa and Clarence Hansen. Her father and brother, Elwood, passed away when she was young; as a result, she developed... View Obituary & Service Information

The family of Bonnie Dyer created this Life Tributes page to make it easy to share your memories.

Bonnie Hansen Dyer passed away peacefully in her sleep on March...