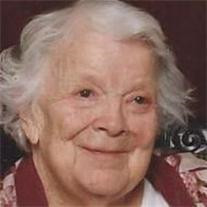 Bonnie Darleen Farrimond Wright, age 95, of Provo, Utah, passed away on Tuesday, April 12, 2011, surrounded by family and friends. She was eagerly looking forward to reuniting with family members who had gone before her. She was born on Feb. 3, 1916 to Jack Farrimond and Millie Baker Farrimond. She was the oldest of eight children. She married Chester Jasper Wright on Dec. 12, 1935. Together they raised a family of eight children. Darleen was a faithful member of The Church of Jesus Christ of Latter-day Saints. Her faith sustained her through many trials. She served in many callings in the church throughout her life and her most honored calling was as a temple worker in the Provo, Utah Temple. Darleen is known for her quilting, crocheting, cooking and her beautiful handmade rugs. Her rugs grace the homes of many friends and family. She also loved to work crossword and Sudoku puzzles and continued doing so right up to the end. Her greatest love is her family. Darleen made friends with everyone she met and she could usually find a common ancestor or acquaintance with almost everyone. Darleen was preceded in death by her parents, her husband Chester, her sons Gene, Thomas, Robert and David, four grandchildren, two brothers, three sisters and one daughter-in-law. She is survived by her two sisters, Donna Jensen of Idaho Falls, Idaho and Jossine (Lyle) Surrey of St. George, Utah and four children, Stan Wright of Lake Forrest, CA; Marilyn Kobylanski of Provo, Utah; Doug (Jeannine) Wright of Douglas, AZ and Bonnie (Jack) Gauchay of Provo, Utah; 20 grandchildren, 37 great-grandchildren and 15 great-great-grandchildren. The family would like to thank the IHC Hospice team who provided such loving care and friendship to her. We couldn't have done it without you. Funeral services will be held at 2:00 pm on Monday, April 18th in the Freedom 1st Ward Chapel, 888 South Freedom Blvd., Provo, Utah. Friends may call prior to the service from 12:30 to 1:30 p.m. Darleen will be buried in the Provo Cemetery. Condolences may be sent through www.bergmortuary.com or [email protected]

Bonnie Darleen Farrimond Wright, age 95, of Provo, Utah, passed away on Tuesday, April 12, 2011, surrounded by family and friends. She was eagerly looking forward to reuniting with family members who had gone before her. She was born on Feb.... View Obituary & Service Information

The family of Bonnie Farrimond Wright created this Life Tributes page to make it easy to share your memories.