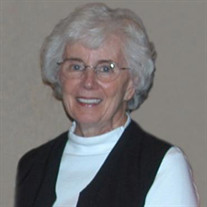 Boneta (Bonnie) Josephine Bushnell Williams, our beloved mother, grandmother, great-grandmother and friend passed away January 16, 2019 surrounded by her family in Orem, Utah. She was born to Alonzo Davies and Dorothy Cox Bushnell on June 1, 1928 in Meadow, Utah. She grew up in the Salt Lake City area and graduated from East High School. She married Lewis Keith Williams, who preceded her in death in 1991, in the Salt Lake Temple on September 14, 1950. Their union was blessed with seven children, to whom Bonnie was totally devoted. Her energies were completely focused on raising her family. Bonnie served in many capacities in The Church of Jesus Christ of Latter-day Saints. She served for years as a leader in the Primary, Young Women, and Relief Society organizations. She was a devoted visiting teacher and known for her outreach to the women of the LDS Church, especially to those who might be struggling. Bonnie also served in her community in PTA leadership positions while her children were in school. She was a long-time volunteer for the March of Dimes. Following a number of transfers throughout the United States during Keith’s early career with the FBI, Bonnie and Keith made a permanent move to Kansas City, Missouri in 1956. They raised their family in the Kansas City area and were instrumental in building up the Church there for more than 35 years. Beyond her own callings, Bonnie was supportive of Keith as he served faithfully in many leadership positions. After the passing of Keith, Bonnie returned to Utah, where she resided in Orem for 25 years and continued her service to family and the Church. After raising her 7 children, Bonnie traveled widely throughout the Americas, Europe, the Middle East and Asia. Even with her interest in traveling, Bonnie made it a priority to be present for the birth of each of her grandchildren. Bonnie was a product of the Great Depression and could stretch a dollar further than most. She imparted these values in frugality to her children. As an accomplished seamstress and cook, she blessed the lives of her family and friends with her self-taught domestic skills. Bonnie was preceded in death by her husband, Keith; son, Roger; sister, Donna; her parents Alonzo and Dorothy Bushnell and 2 sons-in-law, Bob Cella and Doug Beck. She is survived by her children: Marie Cella, Sandra Beck, Steve (Ellen), Scott (Dhreen), Sherman (Susan), Andrea Roney (Burke); 33 grandchildren and 43 great-grandchildren with 6 on the way. Funeral services to honor her will be held at 11:00 a.m., Saturday, January 26, 2019 at the LDS Chapel located at 828 West 1600 North, Orem, Utah. The family will receive friends from 9:30-10:30 a.m. prior to services. Interment, Mount Moriah Cemetery in Kansas City, Missouri on Monday, January 28, 2019 at 11:00 a.m. Condolences may be expressed at www.bergmortuary.com. In lieu of flowers, please consider contributing to the missionary fund for The Church of Jesus Christ of Latter-day Saints. Our gratitude to the caregivers at Tender Care Hospice.

The family of Bonnie Bushnell Williams created this Life Tributes page to make it easy to share your memories.