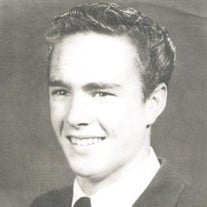 Boyd Madsen slipped the bonds of earth in the early moments of December 24th, as he was watched over by his children. His passing was a tenderly anticipated release, and most assuredly, a sweet and joyful reunion. Boyd was born to George Willis Madsen and Leona Dyson in Provo, Utah on April 1st 1934, April Fool's Day. Boyd came to this world with a tendency toward elaborate pranks and an unquenchable thirst of knowledge for flight and exploring the mysteries of space. Boyd married Norma Burnside on February 9th 1953. They were sealed for time and eternity in the Manti Temple one year later. Their firstborn son, Barry D. Madsen, survived just 10 days. He was beloved and missed. Boyd and Norma were subsequently blessed with 5 additional children. The family resided in Renton, Washington, where Boyd was employed by Boeing Aircraft. Boyd and Norma divorced in 1963 and Boyd subsequently married Judith Warrender, who presented him with a daughter. Boyd and Judith resided in South Pasadena, California, where Boyd worked with the Voyager Spacecraft Team at Jet Propulsion Laboratory. Boyd and Judith divorced in 1978. Boyd later met and married fellow JPL employee Linda (Lynn) Quattro, mother of Scott and Mickey Quattro. After his retirement from JPL, Boyd and Lynn relocated back to his beginnings in Provo, Utah, where Boyd was better able to care for his parents and live close to 4 of his children. At that time, Boyd returned to activity in the LDS Church and fulfilled a favored role as an ordinance worker in the Provo Temple. His faith became a foundation upon which he was able to reconcile relationships with his former spouses. It also helped him move forward with hope as an attentive caregiver to Lynn, prior to her passing in November of 2004. Boyd's eldest daughter, Kathy, followed just over a year later, passing away on December 23rd, 2005. Boyd lived a very full life with a passion for skiing, skydiving, scuba diving, photography and building and flying model aircraft. He was awarded a NASA medal for re-establishing contact with the Voyager Spacecraft within one week of loss of contact. In his later years, Boyd came to know his first wife, Norma's son, Martin Larson, from her second marriage. A deep bond of trust and respect developed between them and Boyd made it known that he counted Marty as one of his own. In his later years, Boyd's point of pride was his numerous posterity. He quoted the numbers of children, grandchildren and great grandchildren as often as he could update them. Boyd was attended to lovingly (and patiently) by his children as his health declined. They often speculated that his final song request would be "I did it My Way". He endured much and fought the good fight, remaining strong to the end. In his final days, he was a favorite of the nursing staff at Seasons of Santaquin, to whom we offer heartfelt thanks for their respectful and tender care. Boyd is survived by his children Debra Hortt (Martin), Gregory Brent Madsen (Annette), Brenda Madsen, Charlotte Madsen, Denise Durett (Brendan) and Martin Larson (Belinda). He is also survived by two brothers and a sister, Ron and Jan Madsen and Joyce Hasborough, and by his former wife Judith Trout. We bid our father a tender and temporary farewell and pray for his further progression and endless opportunities to learn much of the expanses of space, the mysteries of the universe, and the infinite love and atonement of his Savior, Jesus Christ. In a recent conversation with Boyd, he wondered aloud, "What will we do for an entire eternity?" Our answer was, "Create dad! You will have an eternity to create!" He responded with a huge smile. Dad, we love you and until the time we meet again we will be happy imagining all the amazing things you will create! We wish to express our deep appreciation to the amazing staff at Seasons of Santaquin and to the wonderful Hospice nurses who attended Boyd so diligently. Funeral services will be held at 2:00 p.m., Thursday, December 29, 2016 in the Berg Drawing Room Chapel, 185 East Center Street, Provo, Utah. Friends may call at the mortuary from 1-1:50 p.m. prior to services. Interment, Provo City Cemetery. Condolences may be expressed at www.bergmortuary.com.

Boyd Madsen slipped the bonds of earth in the early moments of December 24th, as he was watched over by his children. His passing was a tenderly anticipated release, and most assuredly, a sweet and joyful reunion. Boyd was born to George Willis... View Obituary & Service Information

The family of Boyd Madsen created this Life Tributes page to make it easy to share your memories.

Boyd Madsen slipped the bonds of earth in the early moments of...